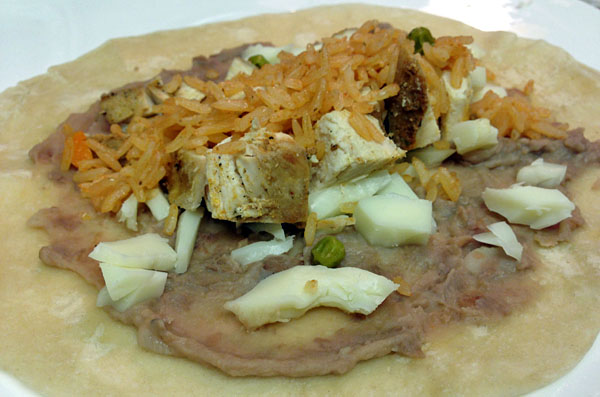 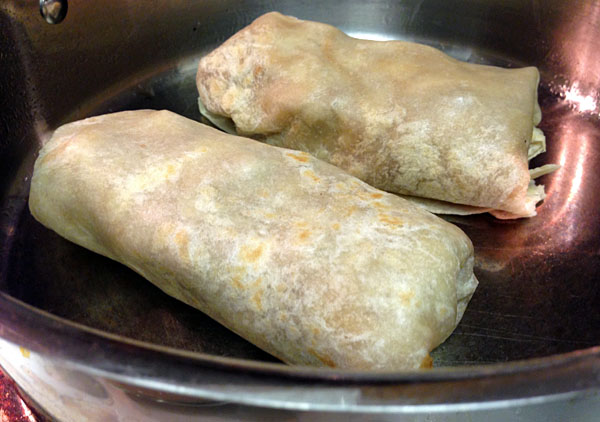 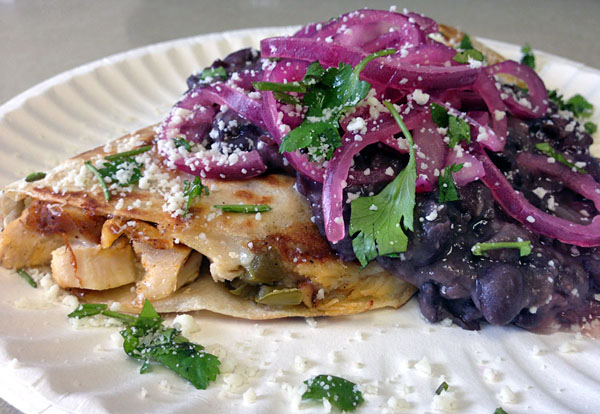 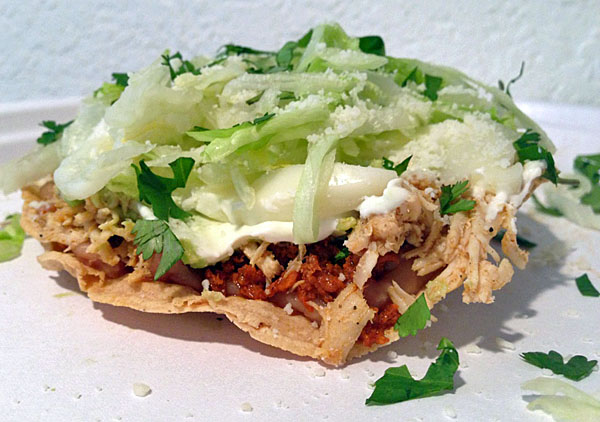 We had Nadia’s cousins and brother over for football this weekend. We’re all big, hungry dudes, so you know I had to whip up something tasty.

I bought a lot of chicken–too much chicken for the tostadas I planned to make–so I’ve been tinkering with new ways to use the leftover ingredients since Sunday. But before we get into reincarnating the leftovers, it’s best to show you the recipe that left me with a Mexican bounty.

If you are looking for a healthy, frugal meal that will carry you through, look no further than the humble tostada: Corn tortilla, beans, meat, veggies, salsa, cheese and condiments.

A healthier me would have omitted the chorizo and the crema, but it was game day and I splurged. But, a little bit of either—about two tablespoons of chorizo and a two teaspoons of sour cream or light sour cream—ain’t gonna hurt none. (Read more: 8 Fatty Foods with Health Benefits—Sour Cream.) 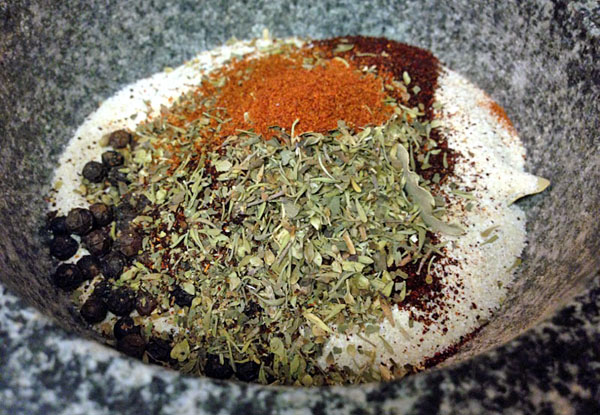 You will get 8 to 10 tostadas from two chicken breasts, depending on how large they are. Forget the quantity I use in the pictures, as I said, I cooked for an army and still have leftovers. Anyways, let’s cook!

Run the mix through a spice grinder or mortar and pestle and that’s it.

For an alternative dry rub made with chipotle chili powder, use Chef Brian’s Chicken Taco Spice. 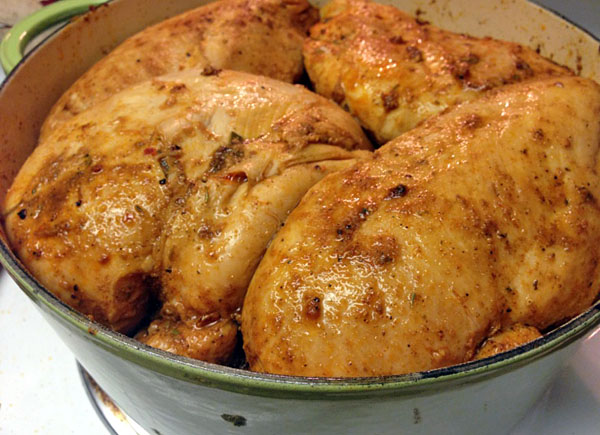 Your best bet to get the chicken tender enough to shred easily with a fork is to braise the meat. To get the chicken ready for braising, give it a good massage with the spice mix and let it sit out and temper for about an hour.

The braise: Heat an appropriate amount of oil in the pan for the number of chicken breasts you are using and sear all of the meat, browning both sides for 2-3 minutes per side. In my version, I first cooked the chorizo in the pan and then removed the meat, leaving behind the chorizo fat to cook the chicken in (with the addition of some canola oil). Once all the chicken is done, add a chopped onion and 3 cloves of chopped garlic to the pan, scraping the bottom free of whatever’s stuck to it.

Add a little tomato paste and cook for 2-3 minutes, until it starts to stick to the bottom of the pan. Deglaze the pan with chicken stock (Video: How to deglaze a pan). Add the chicken back to the pan, and fill it about halfway up the height of the chicken with more stock. Bake at 325 degrees for 1 1/2 hours. 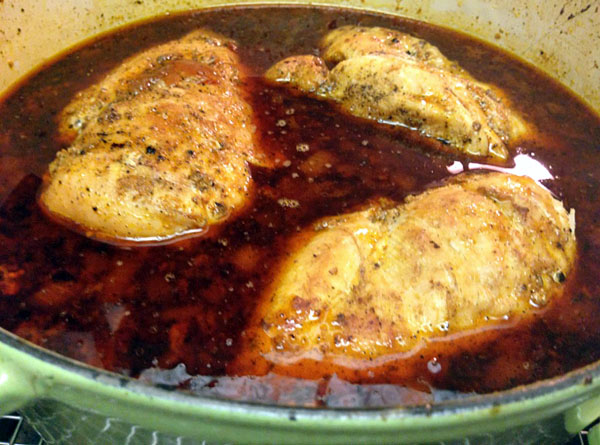 When the chicken is done baking, it will be in a pool of braising liquid. Gently remove the chicken (it’s tender now, so it might fall apart) and leave the braising liquid to cool. When it has cooled, reserve it in a plastic container and put it in the fridge for later use (which we’ll get to on the blog soon).

Make the beans while the chicken bakes: Pinto beans or black beans, either one works here. Black beans are better nutritionally, so that’s a plus, but sometimes I like the lighter flavor of pinto beans better.

Heat 2 t of oil in a small pot and sautee 1/2 white onion and 2 cloves of chopped garlic. You can add spices at this point, including cumin and corriander, if you wish. Add 1 cup of chicken stock and 1 can of drained black beans. Bring to a boil, reduce to a simmer and cook for 15 minutes. Break up the beans while they cook. The liquid will boil out and the beans will thicken into a paste. Salt to taste.

Bake the tortillas: Crank the oven up to 400 degrees once you’ve pulled the chicken out. Hit as many corn tortillas as you’ll need with a spritz of cooking spray and a dash of salt (a solid serving is two per person; a lighter eater might want one and a side salad) and bake directly on a sheet pan for about 10 minutes. I start checking mine at 8 minutes, and keep checking them until they’re done around the 10-12 minute mark.

You want to leave them space on the pan and have the patience to cook them until they’re done right, or else they will be chewy and gross instead of crisp and awesome.

Knock out everything else while the tostadas bake: Shred the chicken with the backs of two forks. Slice the lettuce super thin with a sharp knife. Get spoons in the sour cream and the salsa. Whatever you gotta do to make it Tostada O’Clock. 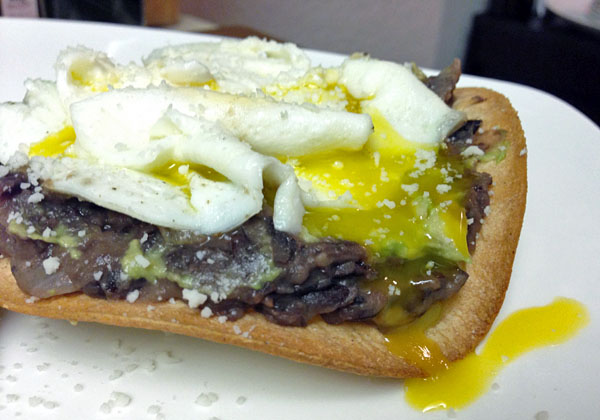 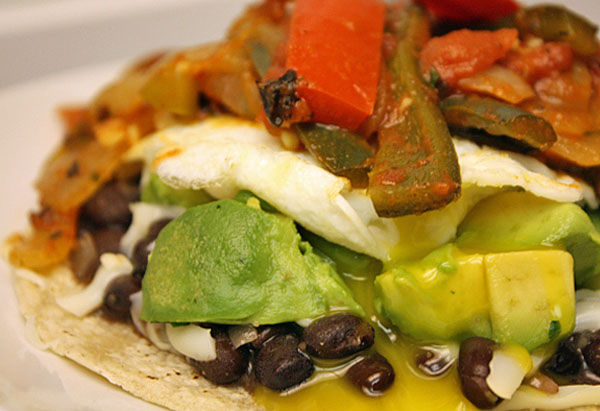 I’ve gone through many highs and lows in the kitchen in the four weeks since this blog’s inception.

I think back to night one when I spent nearly four hours getting the hang of prep work, cook times, burner sensitivity, etc. That was a frustrating day which made me question the stupidity of launching a blog where cooking nightly is mandatory.

I remember Week 3’s Chilean sea bass and the triumph I felt with each buttery bite of fish, each sweet sip of tomato. Putting together Week 4, Meal 3: Huevos Rancheros gave me that same great feeling.

It’s the first time I’ve made any Mexican dish at home that isn’t a quesadilla or doesn’t have this stuff in it. Legit Mexican at home — another notch in my kitchen’s belt.

Speaking of highs and lows, only a handful of times in these four weeks have I not wanted to cook — last night being one of them — but as always my loving wife made me put down the Call of Duty, get my ass of the couch and get to work.

And it’s always worth it in the end. Both in taste, and on my waistline.