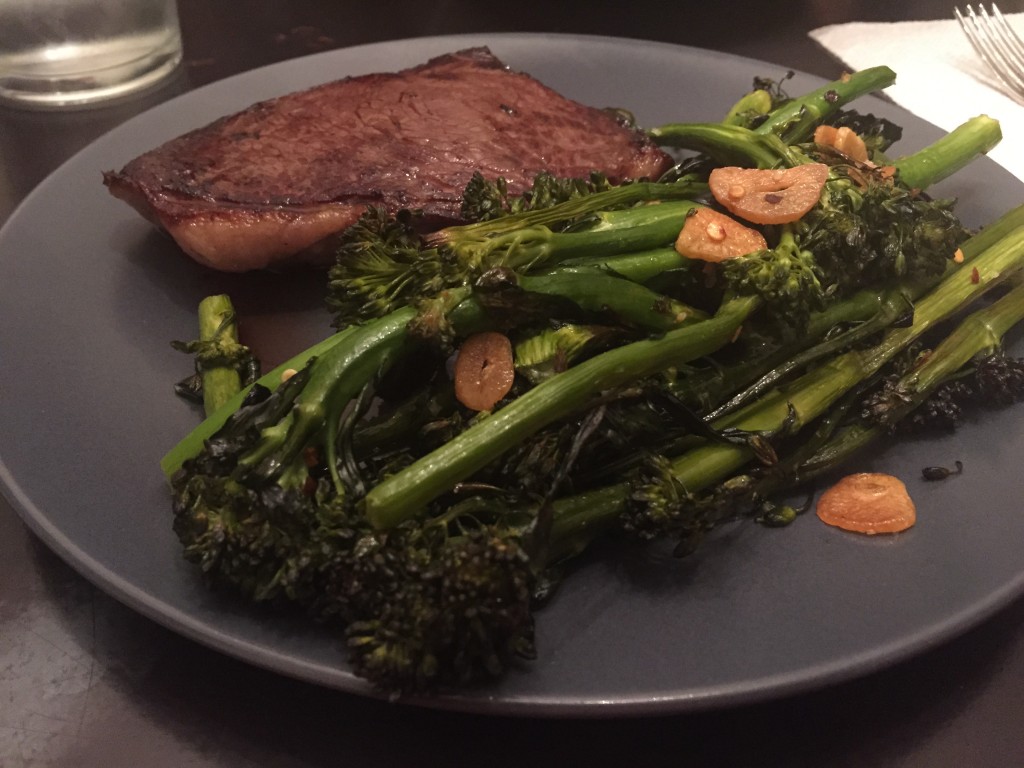 One of the last meals I had before leaving Orange County was the Ultimate Steak Dinner at Playground 2.0 in Santa Ana (info), an over-the-top beef party (yeah, I said it) that only left me with the craving for more bloody red flesh.

If I’m ordering a steak out, chances are it’s a ribeye, skirt or hanger cut. But Costco sells packages of prime top sirloin in quantities of four to six for between $20 and $25. Top sirloin’s one of the leanest cuts of red meat, so it makes for a great weeknight dinner in portions that aren’t of the XL steakhouse variety.

I’ve been trying to pair simple meats with simple veggies since I got back in the kitchen. We cooked the meat first in a water bath and then pan seared it to produce a very flavorful dish. Keep reading for the recipe and how-to. 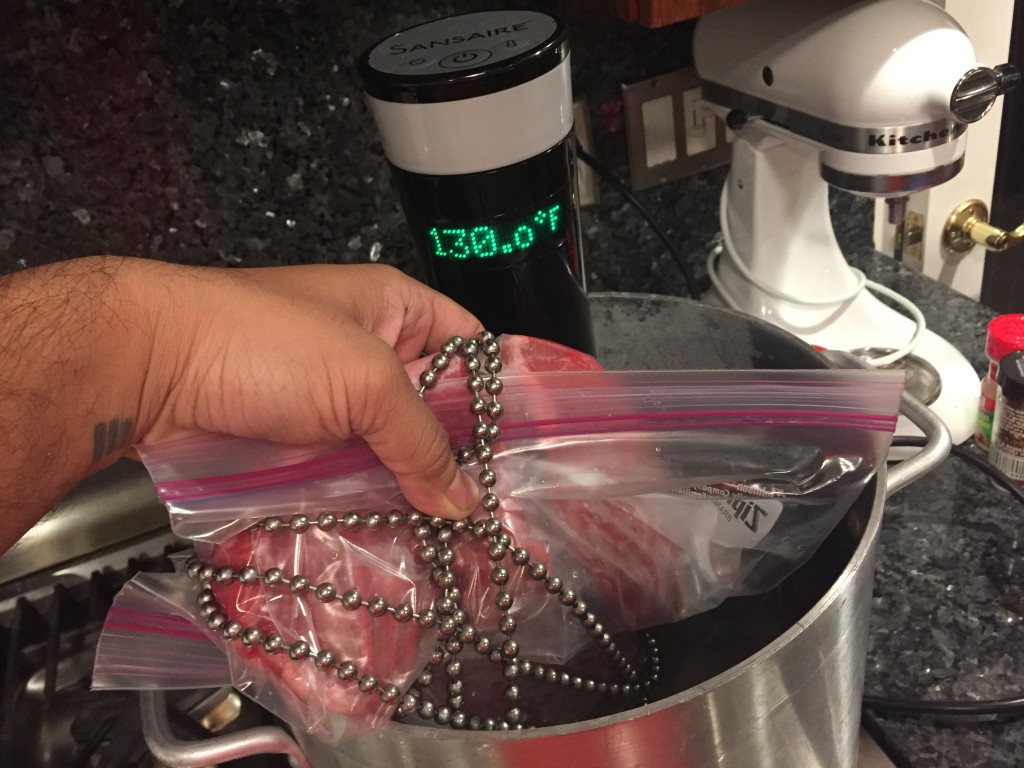 You can grill, broil or pan cook your steaks the way you like them and that’ll work just fine, but my friend wanted to show me the magic of his Sansaire Sous Vide Immersion Circulator, a $200 device that makes it easy to cook sous vide at home.

We used a Ziplock bag and water pressure from the immersion bath to squeeze the air from the bag, securing it in the bath with a weighted chain. For a fascinating read on the science of sous vide steak, check out this breakdown from Serious Eats.

For us, 45 minutes at 130 degrees produced perfect medium rare steaks. Realistically, because the cooking method brings food to temp and keeps it there, you could leave the steaks in the water bath for many hours without compromising their quality. 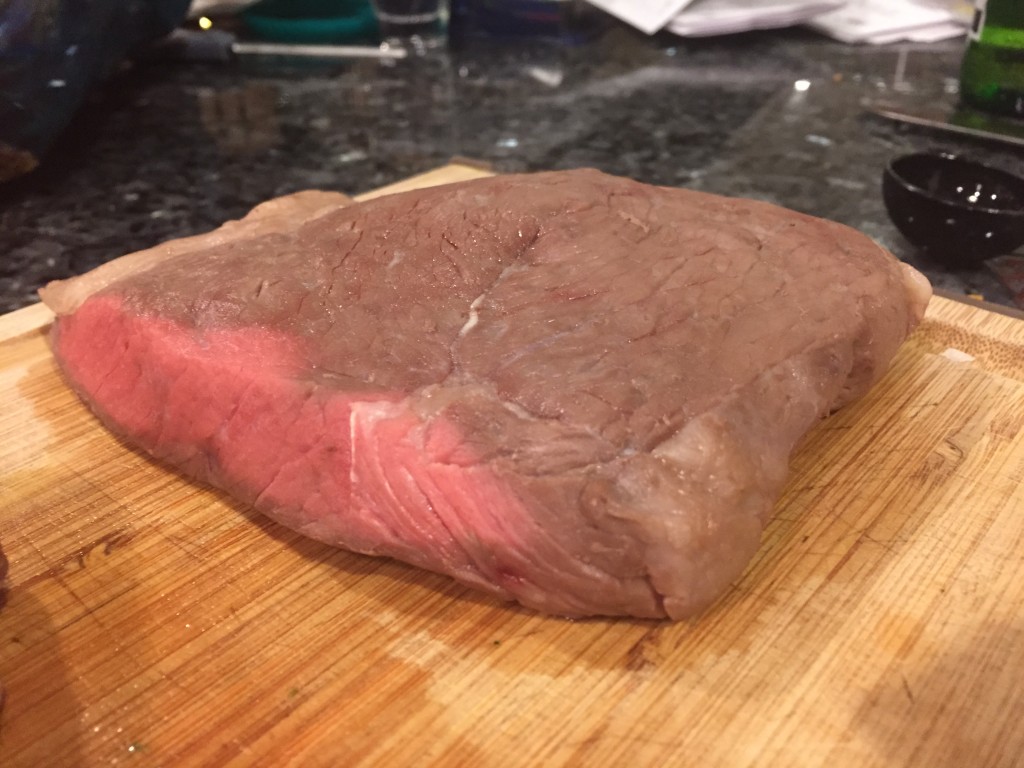 Warning though, when it comes out of the bag the meat is seriously gross (because of the breakdown of fat and connective tissue) and will have a strange, slightly mushy texture. 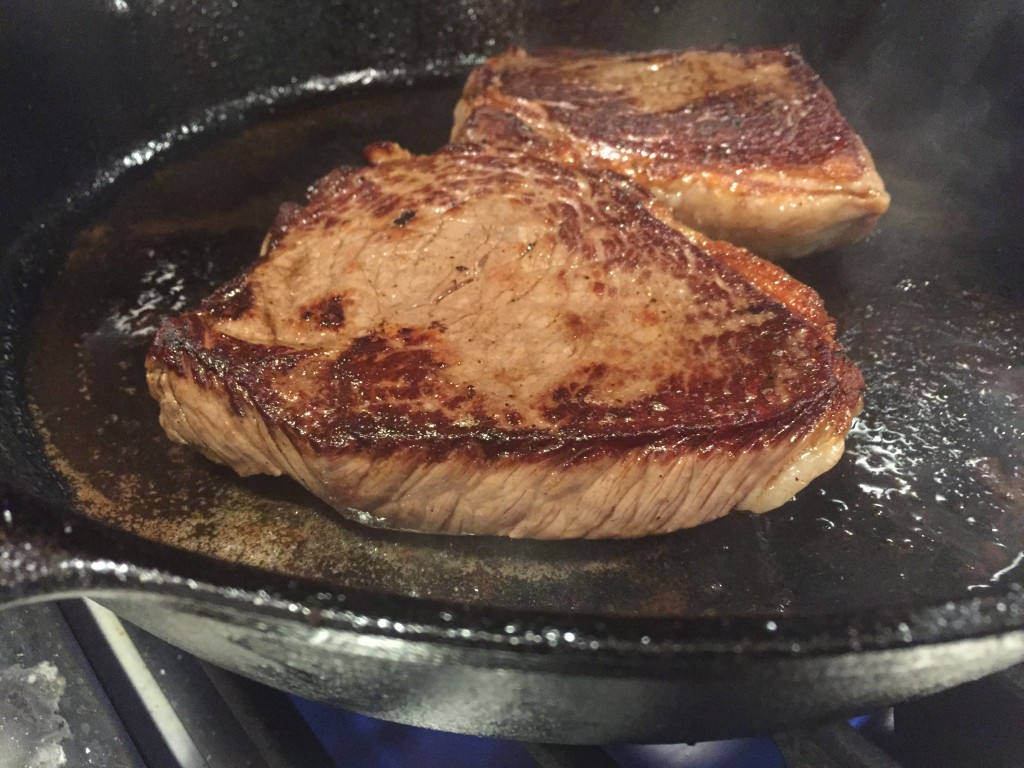 Pat the steaks dry and finish them in a cast iron pan over high heat to develop a crust, about 1 1/2 min. per side. Add a sprinkle of sea salt and they’re ready to serve, no resting time necessary!

Meanwhile, while the meat slowly comes to temp in the water bath, you could also whip up the side dish: 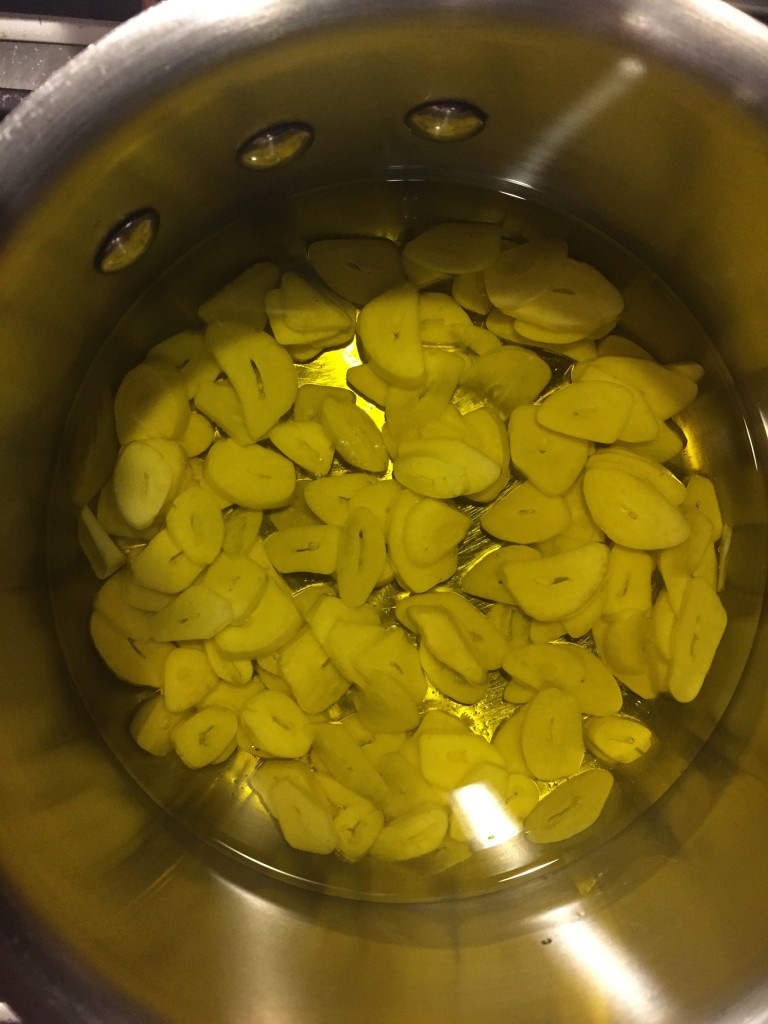 You’ll want garlic chips and garlic oil to garnish the broccolini with.

Peel and slice the cloves of 1 head of garlic and combine in a saucepan with 1 cup of olive oil. Cook over low heat for 20 to 25 minutes, until garlic cloves are crisp but not burned.

You’ll have a lot of garlic oil left, but it’s great with all kinds of dishes and salads, so get creative and don’t let it go to waste! 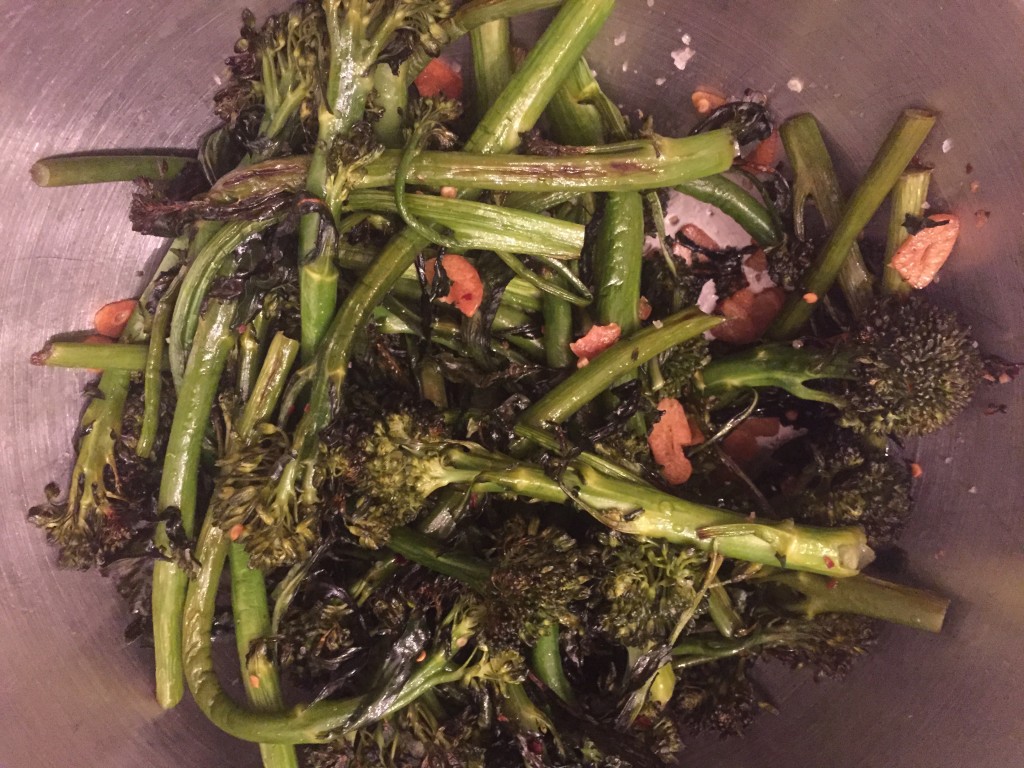 In a bowl, coat two bunches of broccolini with some of the reserved garlic oil, 1/2 t of red chili flake, salt and pepper. Roast the vegetables at 425 degrees for 20-25 minutes, until the tops of the stalks are crisp but not burned.

Finish the broccolini by tossing it with a little more garlic oil, salt and pepper and the garlic chips from earlier. 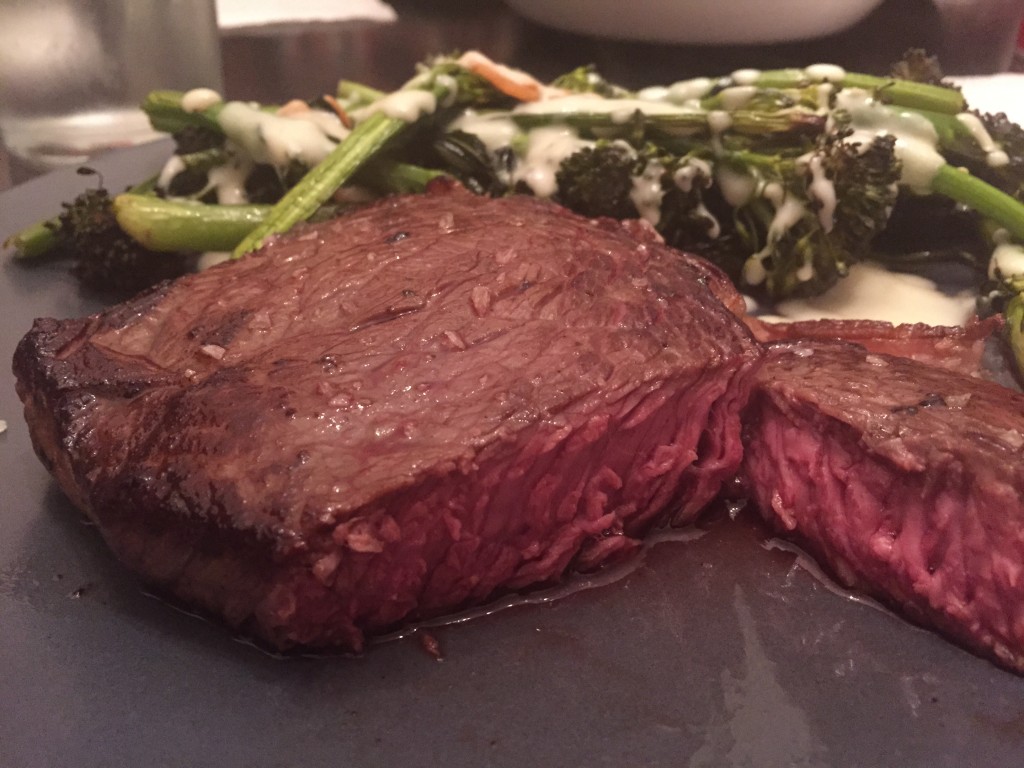 We had some sauce from Beecher’s “World’s Best” Mac and Cheese recipe on hand so you know we used it to top the broccolini. Yum!

The Recipe
Steak
Prime top sirloin steak (however many you want to cook)
Sea salt, to taste