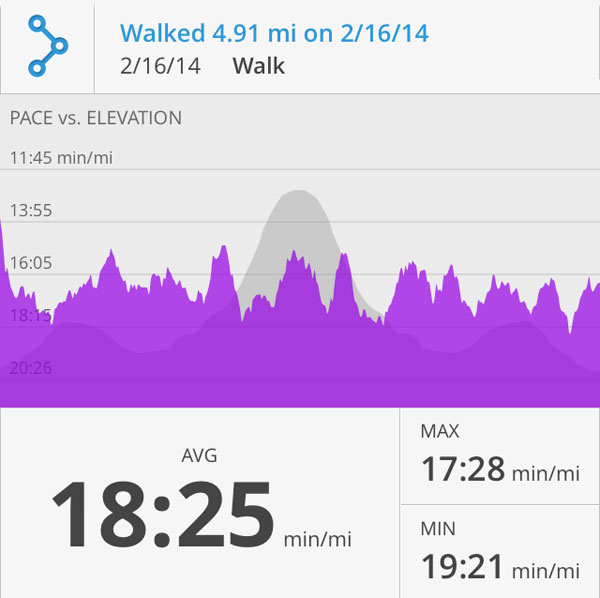 I started weight lifting last year, but gave up after a while because of my back pain. Instead of the weights, I decided to dedicate my time to walking off the weight, which was what I originally set out to do on this blog.

My goal last year was to finish on Dec. 31 with 300 miles, because I like big round numbers. I started last March with a friend at work on a 2.81 mile track that we would later lengthen for a solid 3 miles each go-around. We marched through lunch break after lunch break, and over time the pounds started falling off. My calves got ripped (I get comments on them, for real, lol) and one woman even stopped me on the route one day to tell me how much weight I’d lost. I was down to the low 220’s, even seeing 219.something on the scale one day in mid-summer.

We were doing pretty good until the end of August/beginning of September when it got scorching hot outside (Orange County hot, so like high 90s). Then Halloween (candy). And Thanksgiving (pie). And Christmas (cookies). Somewhere along the line, Jack in the Box released the Munchie Meal and there went my waistline.

Chef Brian once told me “easy on, easy off” in regards to gaining and losing small increments of weight over short periods of time, say, a vacation or break from a stricter diet. I definitely took that too far, and watched as the scale went back up and up and up to 240.1, which has twice been my red alarm on this blog for the fluctuation in weight and roller coaster that is long-term weight loss.

In the beginning of 2013, I made a goal to give up on restaurants and create a better me, and while I started out that way, by the end I had given it back once again. That I had failed to make it to Dec. 31 with more than 300 miles really hit me hard. I hate failure. Especially when the blame is solely on me.

I should learn by now that life is better when it evolves organically, not when you try and force something, because, by the end of the year, there were a couple of changes that happened which have brought me to where I am now.

One: I found a solution to this back pain in the form of the atlas adjustment. I’ll likely get into it in a future post, and while it’s not a permanent fix, it’s the most-permanent fix I’ll ever have and I’m so thankful for it. After being in pain for nearly three years straight, to finally experience some relief has literally saved my life. I was starting to lose it a little and fray at the edges. I’m doing better now.

Two: Nadia gave up meat in November. There was a time before I met her in 2006 when she was a vegetarian (and survived on the veggie burritos from King Taco). Sometime before Thanksgiving she decided that she didn’t want to eat meat anymore for heath and ethical reasons. Writing this in the same week that Hot Pockets have been deemed poisonous, I don’t blame her. I’ve likened myself to Samuel L. Jackson’s character in Pulp Fiction when he wants a bite of the Big Kahuna burger because he’s mostly vegetarian now since his lady dictates the diet.

Nadia isn’t telling me what to eat so much that it’s easier to cook for two if I’m making the same things for both of us. Plus, the omission of meat has allowed us to stretch our food dollars a little more. We ate a lot of beans (and bean burritos), shrimp and tuna fish sandwiches in December and January while I was still figuring out–as a life-long carnivore and glutton–what exactly the hell to do to in the kitchen.

That’s where seitan and brown rice/pasta come in. I don’t know what changed, but I no longer think brown rice or pasta are disgusting. They’re just fine and I’m good with it. I’ve also started making my own seitan, which is a vegan meat substitute made of gluten (YES, THAT GLUTEN). It’s the isolated protein of wheat and you can use it just like you would chicken or beef in a ton of recipes.

As I continue to update Fat Dude, a lot of posts will cover the number of things I’ve been making with seitan lately. A few of my meals are even vegan. By choice. What?!

Three: I’ve been working out again and it’s made a lot of difference.

Rewind a little though … I hate New Year’s resolutions because I think they’re bullshit. If you want to start something, start it today. Don’t wait for an arbitrary restart that you’ll likely give up on. I say that as a person who made those kind of promises to myself year after year only to give up over and over again. I only started this year in January because I still wanted to shove my face with sugar and crap and Munchie Meals during the month of MostOfTheEndOfLastYear. Straight up.

I know myself and know that I can’t allow myself to fall into patterns with fatty/sugary foods. We all have different issues and triggers and I recognize that– and recognize I am easily susceptible to mine if I allow myself to be weak/on auto-pilot.

I started hitting the weights with my friends from work and then Nadia too started hitting the weights with me, so I’ve switched to only lifting with her. I’ve been tracking gains, of which there are some, and I’ll be posting those here soon. The best part though is the shape of my body is changing. I even have triceps that pop out when I flex. They make me feel like the Hulk.

Having Nadia with me has made a world of difference because it’s something we can accomplish together. I started walking again, by myself, with my group of friends at work, and with Nadia, too. Recently we started taking these 5-mile hikes from a neighborhood in Aliso Viejo to the top of a peak in Laguna Beach called Top of the World.

It wasn’t December anymore. But I hit 300 miles. I earned them, each one. And, though I went down then back up, I weigh less at this time this year than I did last year, and I have more muscle. That’s a win. No matter how ugly it was at times.

Just another reminder that it’s not the end result, but the journey of getting there that really matters. If you focus on the journey, you’ll eventually reach the end.

Perseverance is the key.