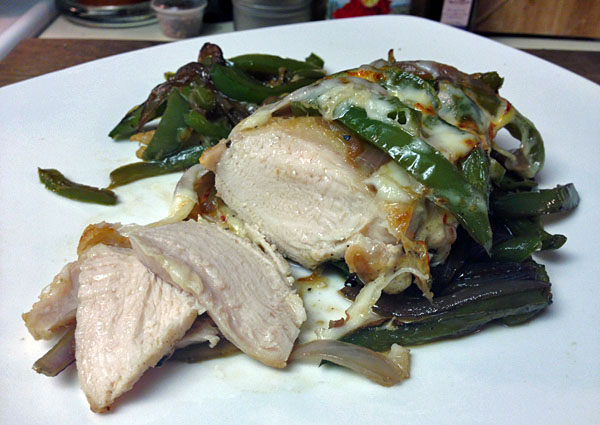 The Philly cheesesteak is the most glorious of all meat and cheese sandwich combinations beside the noble cheeseburger.

I used to go with a ‘Whiz Wit’ at Philly’s Best: Crisp slivers of steak smothered in onions, peppers and melted cheese. I also used to add a ginger ale, split an order of fries and get Tastykake’s for dessert. Gah.

Here’s a way to lighten things up and still enjoy the flavors of a cheesesteak without the guilt.

First. Out with the beef. Also, no bread. There are enough veggies,however, that you’ll be full without needing the carbs.

Start by preheating the oven to 400 degrees.

In a saute pan, heat 1/2 t of canola oil and sear a salted chicken breast, skin side down first, so it develops a nice crust–about 3 minutes on medium-high. Flip it over and do the same thing for another 3 minutes. 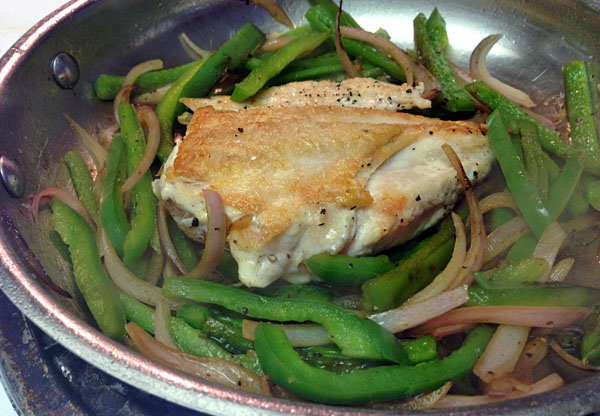 Remove the chicken and set aside. Add another 1/2 t of canola oil to the pan and throw in the onions and peppers. For one serving, I used 1 green bell pepper and 1/4 red onion, both sliced thin. Salt them in the pan and cook over medium-high, deglazing the pan with water as needed if the veggies start to stick. Season with salt and pepper.

Cook for 5-7 minutes, until the onions become slightly translucent. Spread the veggies out and add the chicken back into the pan. Toss in the oven for 10 minutes.

Using a thick towel or mitt, and taking care to avoid burning yourself, remove the pan from the oven. You can either use the broiler or the oven to melt the cheese on top, so if you decide to broil, now is the time to turn it on. 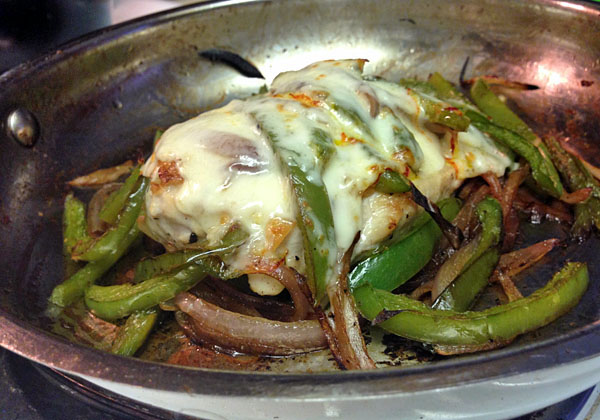 Scoop up the veggies with tongs and mound them on the chicken. Top the pile with 1 oz. of cheese. I had muenster, so I used muenster. It turned out to be an excellent choice.

Slice it thin, sprinkle with a little dried oregano and dig in.