In trying to preserve my grocery budget of $150 every two weeks, I’m teaching myself to buy certain items in bulk and utilize all of the stuff in my pantry before spending money at the store.

Here’s two meals that were quick to make and light on the budget this week:

I buy pizza dough from the local pizzeria up the street. They sell a mini dough, about 7 ounces, for $1. I already had pasta sauce from making the “$4 Spaghetti That Tastes Like $24 Spaghetti,” fresh mozzarella and a small container of pepperoni in my freezer from the last time we made pizza at home. (The sauce also worked in: Skinny Chicken Parmesan, Two Ways.)

I turned the pomodoro sauce into a heartier pizza sauce by simmering the sauce with a little sauteed garlic, lots of oregano and a drizzle of honey until some of the water evaporated and the flavors concentrated. I chopped up the meat into confetti and sliced the mushrooms thick, so they’d have some meatiness to them. A little bit of pepperoni went a long way, giving me the flavor I wanted with less calories.

It all went into the dough, then into a 450 degree oven for 7 minutes. I broke the dough trying to transfer it from my board to my pizza stone (a large granite tile) so the final picture was a little lacking. The calzone was just under 500 calories. Next time I’ll ditch the pepperoni and up the veggies for an even lower calorie entree. 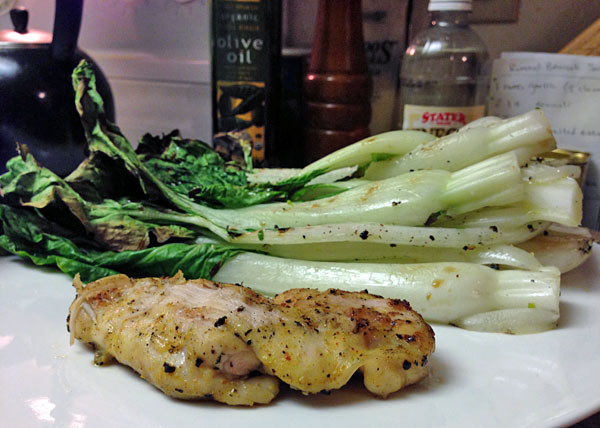 I soaked boneless chicken thighs in coconut earlier in the week to make coconut-crusted chicken, but I still had two thighs left in the milk. So I left them in there for two more days, allowing them to soften up and take on the natural sweetness of the fruit.  An hour before I was ready to use the chicken, I shook off the excess milk and rubbed the meat in Madras curry powder, letting it sit out and come to room temperature. My grill was on the fritz, which explains that terrible missing chunk on top of the meat because the grates weren’t hot enough, but the end result was spectacular nonetheless.

As good as the chicken–if not slightly better–was the grilled bok choi on the side. I read on Serious Eats that the best way to grill it is to leave it in tact, slicing only once through the stalk and grilling all pieces until they have a slight char, about 1 and a half minutes per side.

Finish with a drizzle of olive oil and a few splashes of good quality soy sauce, and you’ll be surprised at the complex flavor that comes from such a simple and light preparation.