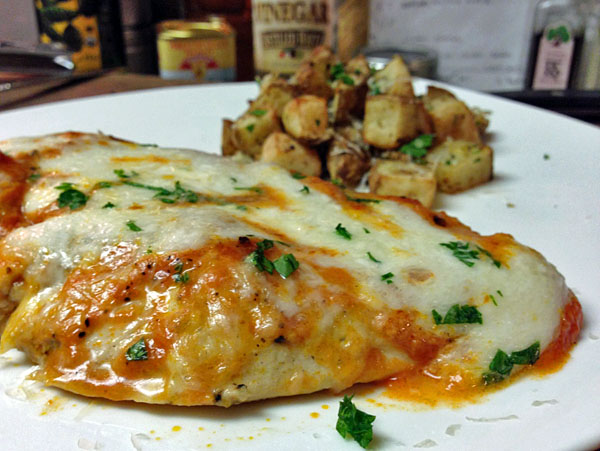 We had a jar of pasta sauce leftover from making the “$4 Spaghetti that Tastes Like $24 Spaghetti” and a tub of fresh mozzarella I picked up on the cheap at Costco, so it seemed only logical to put the two together.

I stopped by the market on the way home for a thick chicken breast that I had the butcher slice into thinner cutlets. (Yeah, I could do this myself, but mine always come out uneven and janky.)

Most restaurants serve chicken parm that is over-sized, breaded and fried, then drenched in sauce and smothered in cheese. Enough pasta to feed four usually comes on the side. The chicken parm plate at Olive Garden has 1,090 calories, according to CalorieKing.

But there’s two ways to make the dish that drastically lowers the count while preserving the same flavors. Don’t forget to add salt and pepper where need be. 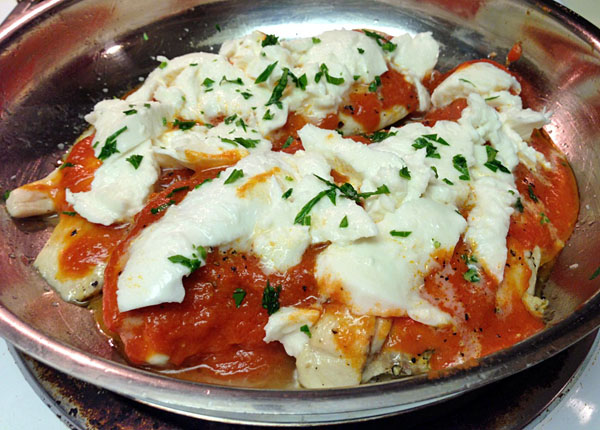 The first method is what you see above. No breading at all, but 2 oz. of fresh mozzarella (120 calories) per breast slice. To make it this way, grab a pan you can throw in the oven and sear the chicken on medium-high for 3 minutes. Flip it over, top with sauce and cheese, sprinkle with a little bit of parsley and bake for 3-5 minutes at 400 degrees (depending on the thickness of your fillets). Finish under the broiler until the cheese browns a little. 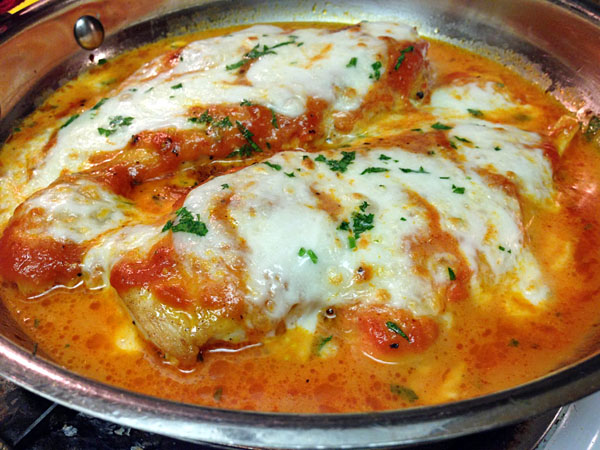 With a roasted potato, I was at 450 calories. Take that Olive Garden.

The second method, which I don’t have a picture of, is something I came up with one day because I craved the crunch of the chicken parm, but didn’t want all of the calories. I cooked the chicken breast (on a grill then, but in the pan is fine too) and topped it with tomato sauce, freshly grated Parmesan cheese (low in calories) and parsley. Then, I cut a round slab out of a ball of fresh mozzarella, dipped it in flour, then egg wash and finally panko.

I pan fried in a little canola oil to crisp it up. Essentially, a homemade mozzarella stick. It really hits the spot for that “something crunchy” missing from the version up top.