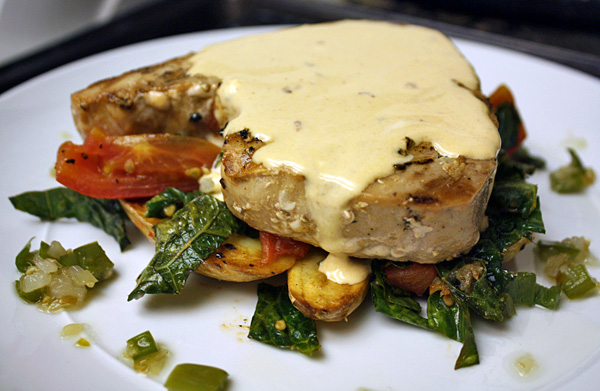 Every once in a while I have a bad day in the kitchen.

I went 75 recipes without cutting myself, and then one week I sliced up my hands pretty good three times: once with a knife to the tip of my finger, once on my food processor blade in the dishwasher and once on the sharp, melted edge of my friend’s barbecue grill brush. After the third cut, I stop touching anything for the week.

Poor execution brings down  Week 32, Meal 3: Citrus and Adobo Marinated Tuna over roasted fingerlings, kale, and tomatoes with garlic-chile oil and adobo citrus sour cream, but the flavors–sweet and smoky–rich and light–were all there.

Things would have turned out better if I did a number of things different: 1) Diced the onion and peppers as tiny as possible, 2) Sliced the kale much thinner, 3) Used the proper portion size for the tuna and sliced it before plating.

You can’t win ’em all on the first go.

Fish
2 5 oz. pieces of ahi tuna (Note: I used two frozen ahi steaks from Trader Joe’s, instead of buying fresh and to size like I usually do. It was the wrong move. Make sure to use 5 oz. of ahi, and get it fresh if possible because the difference in texture is really noticeable)
2 t of adobo mixture from 1 can chipotle chiles in adobo
1 T orange juice concentrate

salt and pepper, to taste 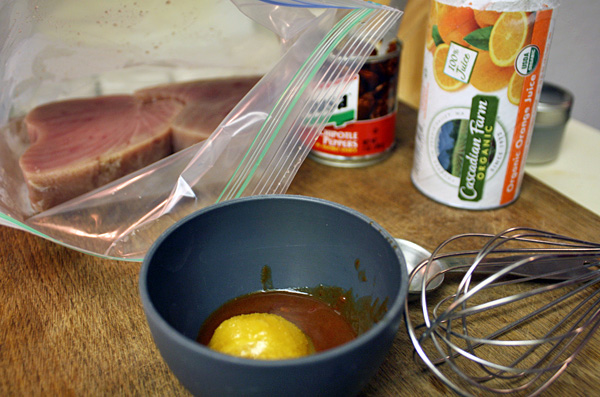 Mix 2 t of adobo with 1 T of orange juice concentrate. Pour into a plastic bag marinate the tuna for 30 minutes to 1 hour. 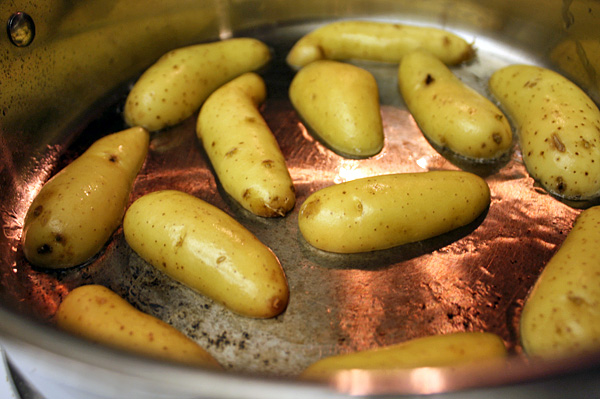 Preheat the oven to 375 degrees.

In a large saute pan, heat 1 1/2 t of vegetable oil over medium-high heat. Add fingerling potatoes to the pan and reduce the heat to medium. Cook the potatoes until golden brown on the cut side. 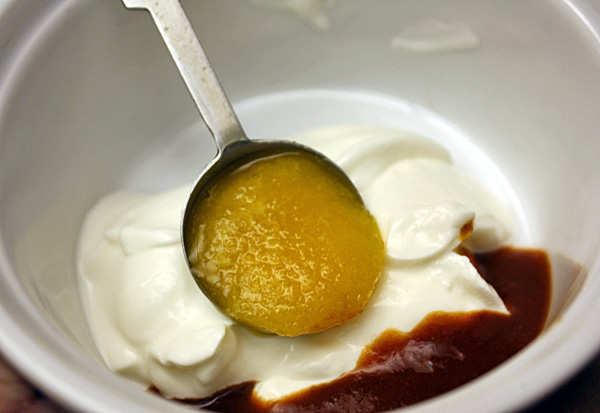 While the potatoes are roasting, knock out the sour cream and the chile oil.

Combine the sour cream with 1 t of orange juice concentrate and 1t of the adobo sauce. Refrigerate until needed.

In a small saute pan mix 2 T of oil with the garlic, chiles and shallot. Put over medium heat and allow to cook until the garlic turns golden brown. 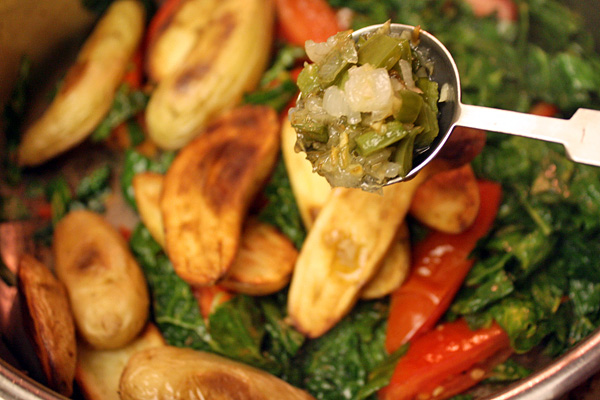 To finish the vegetables, saute the kale and tomatoes over medium-high heat until the tomatoes soften and the kale wilts, about 2 minutes. Toss in the potatoes and drizzle with 1-2 T of garlic-chile oil. Season with salt and pepper to taste. 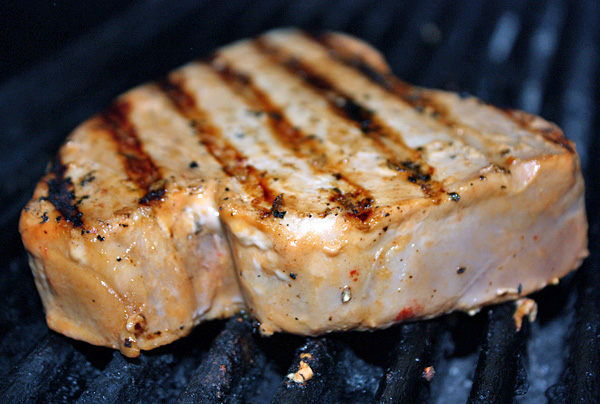 I tend to sear the shit out of my tuna because I don’t like raw ahi, but you should grill your fish on high about 30 seconds to 1 minute per side. Slice the tuna. (Which I forgot to do.)

To plate: Place half of the kale mixture on the plate. Top  with sliced tuna, a dollop of the sour cream mixture and drizzle a little of the garlic-chile oil around the plate.