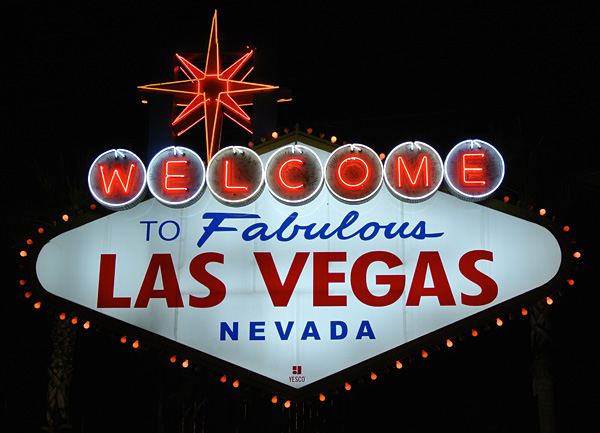 When most people vacation in Las Vegas they drink, gamble and catch a show. I go to eat. And eat, and eat and eat.

It’s easy to do when you’re hanging out with a chef, particularly Chef Brian, who is always keen on pointing out new restaurants and planning return trips to old favorites.

Here’s a Fat Dude tour of Sin City, where gluttony is our guilty pleasure. Keep on reading for the dirty, filthy proof.

é at the Cosmopolitan

Before Wifey Nadia and I arrived, two of our friends dined at é, the hidden tribute to molecular gastronomy inside of José Andrés Jaleo. The pictures they showed me were breathtaking. I can only imagine how incredible the meal actually was. Here’s the multi-course menu: 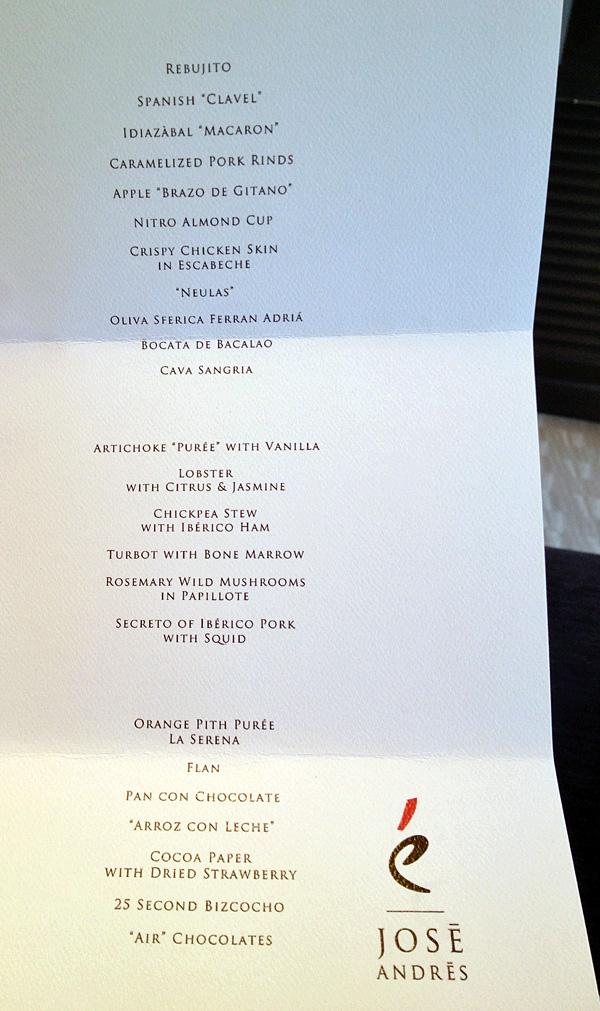 We started our trip with pizza. Settebello used to be our group’s favorite place, but Chef Brian introduced us to a better spot called Due Forni, named so for it’s two pizza ovens that produce different styles of pizza (traditional neapolian and roman cracker crust). Brian’s former colleague from Fiamma in the MGM Grand is executive chef at this restaurant, which was voted best new pizza and best use of bacon in a dessert by local media recently. 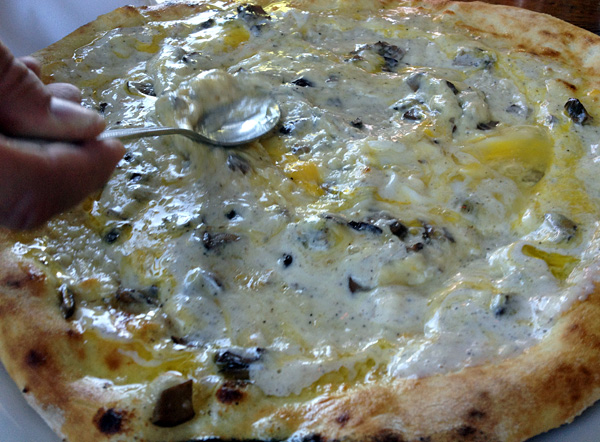 I went with the Tartufo pizza: black truffle, parmesan crema, fontina fontal, roasted cremini and an over-easy baked egg. When the pizza comes to the table the server mixes in the nearly raw egg, which then cooks with the rest of the ingredients. Decadence on dough. 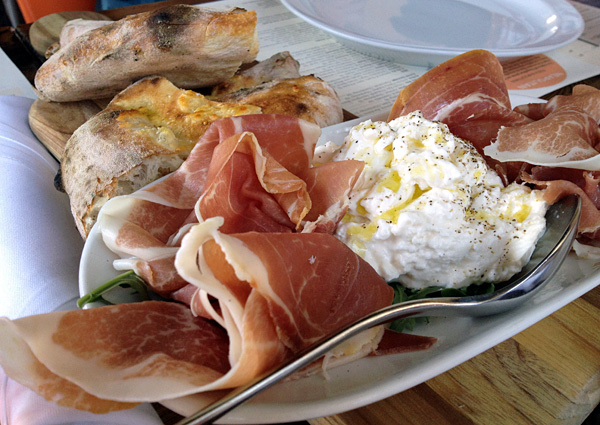 A steakhouse in the vein of Morton’s and Ruth’s Chris, only this one serves steaks that best them both. Bone-in, preseasoned chops and house-made pineapple vodka were highlights. 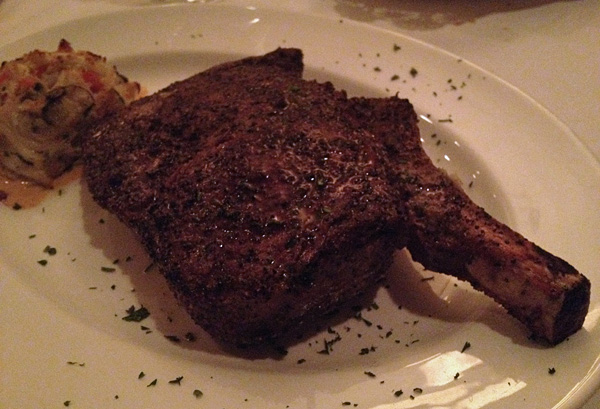 I wish the picture would do justice to this 22 oz. bone-in prime rib eye, but it was dark and I forgot to use Nadia’s better-than-my-iPhone camera. But dang, this one wins the award for best steak ever. The peppery, herbaceous seasoning was the kicker for this huge hunk of bloody beef. 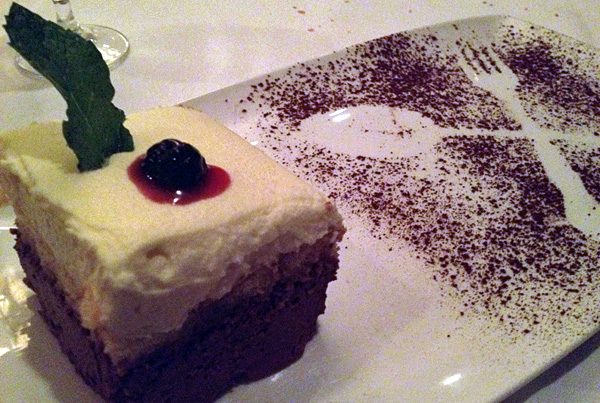 Another “best” was their chocolate mousse–half white chocolate, half milk chocolate, and connected in the middle with lady fingers. Kind of like tiramisu for chocoholics … plus, check out the badass plating!!! 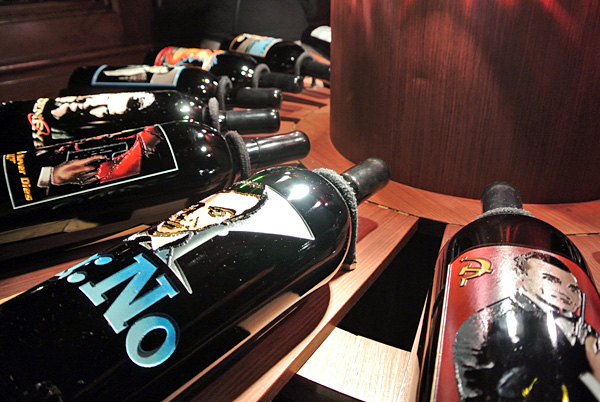 One thing she did get a picture of was the restaurant’s “James Bond table,” that cost close to $15,000. At first look it’s a regular ol’ circular wooden table, but the hostess hit a secret button hidden in a fake book (not lying) and the table extended, fanned out and revealed a score of hand-etched wine bottles, each one designed after a different Bond flick. Baller $hit.

Aside from Chef Brian, Thomas Keller has been the most influential figure in my cooking. He’s taught me that quality ingredients and proper technique are all you need to create amazing meals night after night. He also started my obsession with roasting chicken.

We had Sunday brunch at Bouchon, his series of French bistros. It marked my first visit to a Keller restaurant and I was not disappointed. Here’s a look at a bunch of their dishes, my order being the uber-rich Croque Madame. I felt like I needed to be rolled out of the restaurant (though sharing a bunch of pastries contributed to that, too, no doubt). 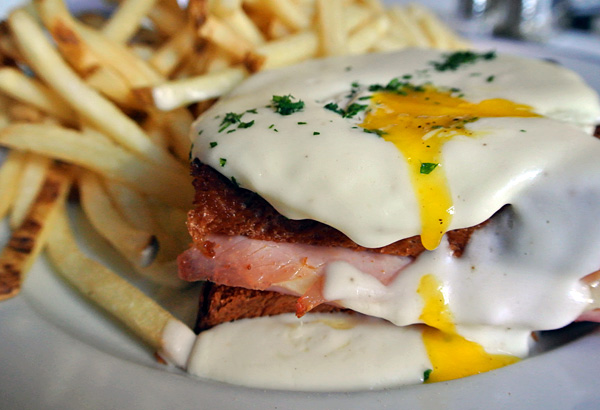 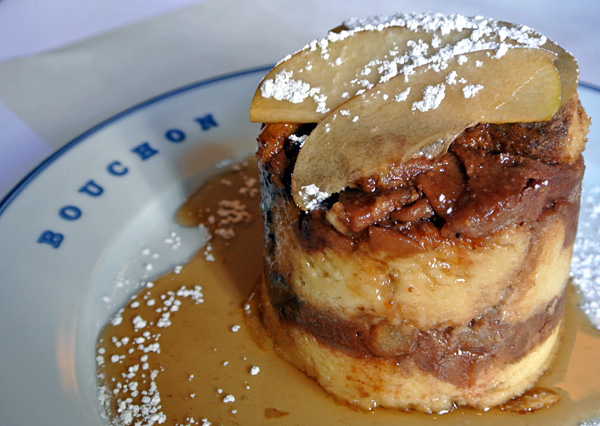 Bouchon French Toast, which Nadia proclaimed to be her new favorite breakfast plate. 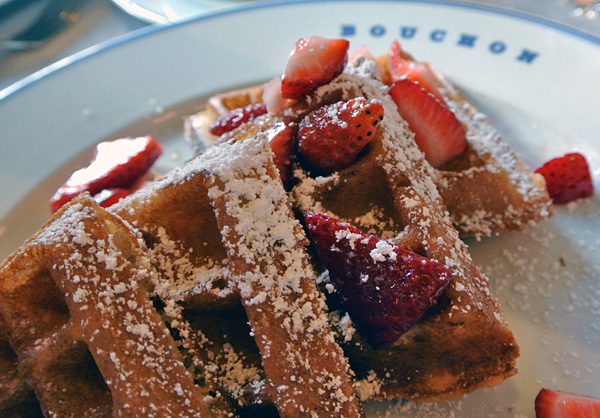 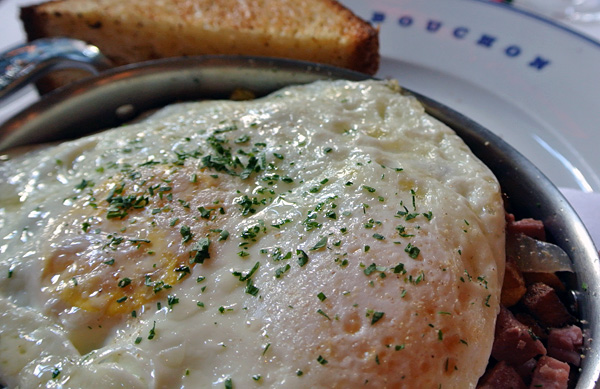 Corned Beef and Hash. The most savory, flavorful hash I’ve ever eaten. Maybe there’s better in New York, but that’s a city I’ve yet to eat through. 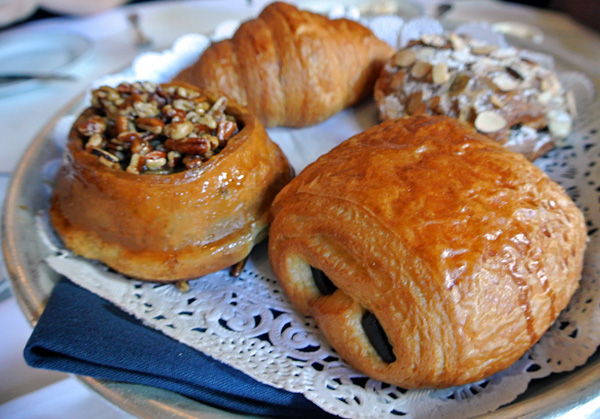 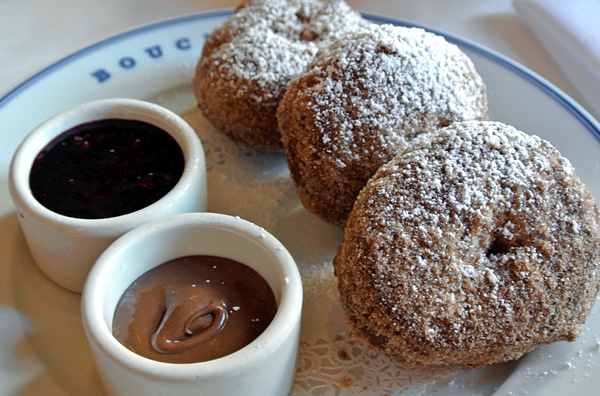 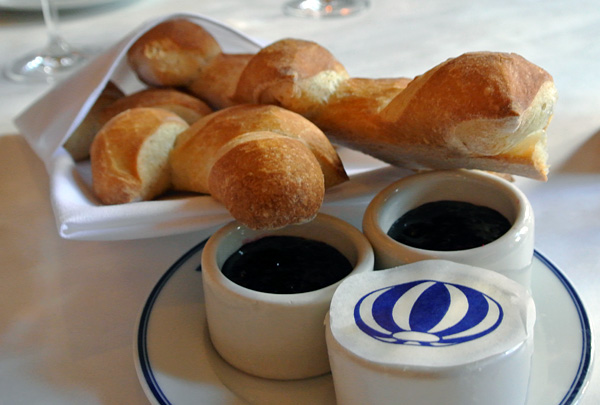 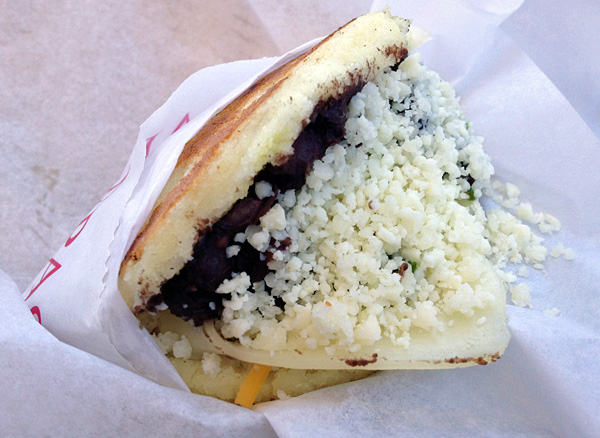 We discovered a roadside stand serving Venezuela’s greatest snack food. This one was packed with smoky black beans, creamy cheeses and cool avocado.

Our favorite Thai restaurant, and the place where this blog was born. Click here for a ton of pictures from a previous visit. 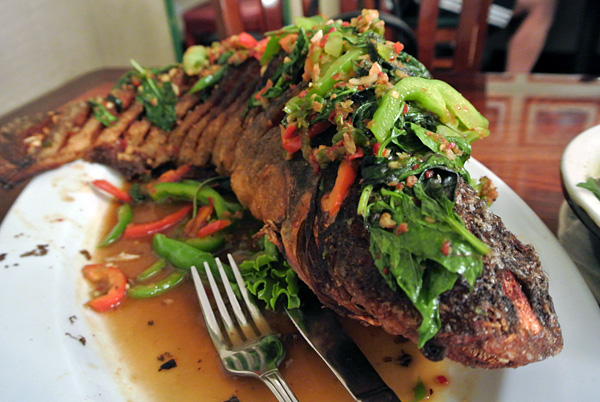 Basil fried catfish. Crispy on the outside, but flaky and succulent within. I picked out a tender cheek and later ate the tail fin. It had the crackle of a kettle chip and tasted of the ocean. 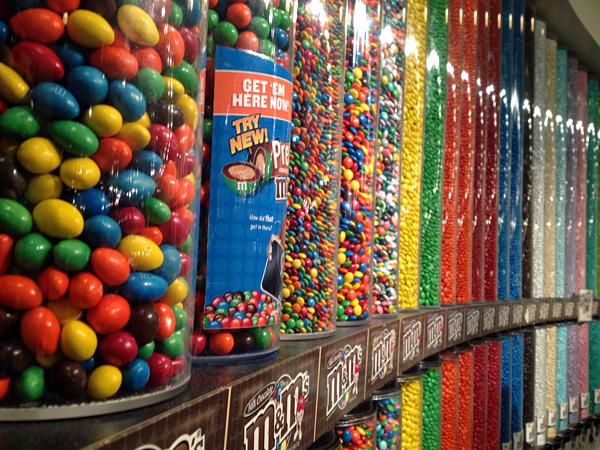 The first candy I ever ate was M&Ms and I’ve had a love affair with them since. Seeing this wall of candy made my childhood dreams come true. I created my own mix featuring various flavors: peanut, peanut butter, pretzel and dark chocolate.

The set piece for one of my favorite movies, I’ve wanted to sip a frrrozen hot chocolate since I watched John Cusack and Kate Beckinsale visit the iconic New York sweet spot in the film “Serendipity.” We finished our trip with a stop at the Vegas location at Caesar’s Palace. 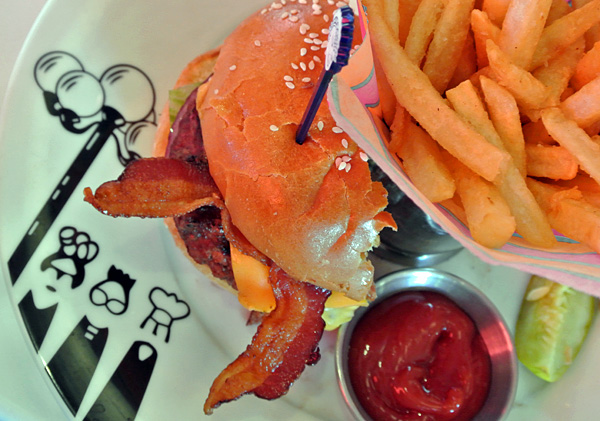 I split the bacon cheeseburger and (awesome, crunchy) fries with Wifey Nadia. Half a burger was more than enough. 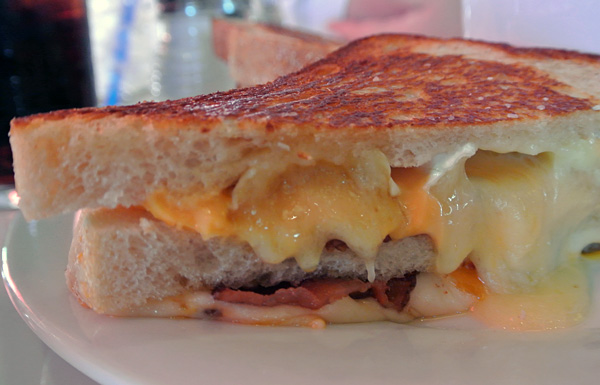 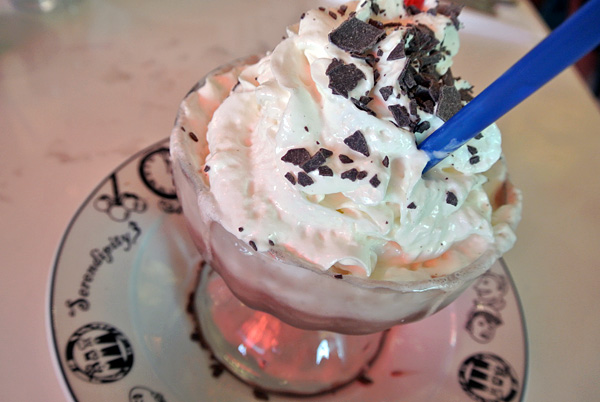 The famous frrrozen hot chocolate. Better than anything Starbucks could ever whip up. If this restaurant was closer, I’d pack on the pounds because of this drink. 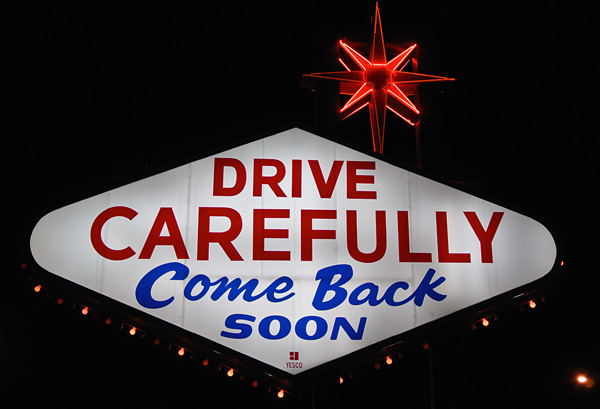 That being said, I’m ready to gorge on grilled chicken and weight lifting after a few days of eating so heavy.

Time to work off this vacation and then some!!!