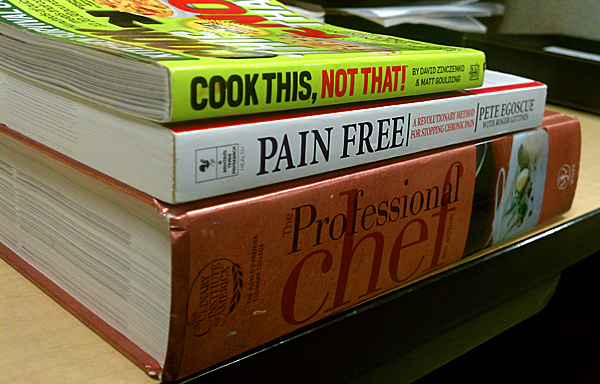 The biggest challenge in doing this blog has been the time required to cook, shoot photos, write and exercise. Well, really, finding the time to cook and exercise is the challenge facing anyone wanting to live a healthier life style.

Originally I had planned to pull of this blog in one whirlwind approach–52 straight weeks of cooking, writing and walking, in order to craft a skinnier me. It’s been nearly a year (early November) and I’ve made it through more than half of the 52 weeks I planned to cook, though I’ve sidelined myself by failing to stick to plan.

In retrospect, I thought that if I wanted it bad enough, it would just happen. That I would make it happen. And in retrospect, I didn’t really understand what it meant to be healthy. I thought healthy was “skinny,” but it’s a lot more than that.

Health comes from proper diet, proper exercise. There’s a lot of it that has to do with managing mental fitness and teaching yourself how to build a long-term lifestyle. In the past weeks, I’ve been focusing on how exactly to do that within the confines of writing this blog.

It’s not that I don’t want to write this blog any more, but that I never thought through how to manage what has become a part-time job on top of my full-time job. After reviewing how much money I was spending on eating meals out, I knew I needed to change for the better and cook the majority of my meals at home.

When it came time in early October to put up, shut up and get cooking, I started strong but slowly returned to my old ways. In examining why, I realized that it’s because after cooking 27 (28?) weeks of Fat Dude menus, I’ve come to expect the type of dinners Chef Brian creates every night of the week.

Instead of cooking simpler dishes at home, I again became used to eating out because it’s quicker than cooking in. I still have the goal of reducing my outside food budget and filling myself with better-for-me foods, so in that vein, I’ve decided to flip around how I live my food life.

I’m going to try cooking the majority of Fat Dude meals on Fridays, Saturdays and Sundays–days where I have more time to experiment in the kitchen, learn new tricks and techniques and properly photograph and write about it all.

I’m also focusing on cook quick, healthy meals on the weekdays so that when I do cook at home, it doesn’t take as long and I have time to do other things including using the gym pass I’ve been neglecting on-and-off for a few months.

I’m also finally addressing the true root of severe muscular pain I’ve been enduring for nearly two years. It’s all tied together, and I’m learning how to manage food, exercise and physical care so that I can live a better life.

In my first few days trying this out, I’m spending less time in the kitchen, the house is cleaner, I’m doing all of my stretches and taking the time to refocus on all of the things stress and an unhealthy lifestyle make you lose focus on.

As I embark on new ways to improve myself, I’m lucky to say I’ll be taking my first out-of-country vacation in nearly six years.

I’m headed off to Mexico in the middle of next week and I’ll be there for about a week. Between now and then I’m going to focus on quick, healthy meals at home and a full menu of stretches from the book “Pain Free” by Pete Egoscue. Wifey picked out the book for me months ago, but I’ve been too sloth-like to really try it out. I’ve been doing the book’s “e-cise” methods for only two days and already I’ve noticed a marked improvement in my muscular pain.

I’ll be back in the kitchen once I return from Mexico around Nov. 10. By that time, I should be rested and ready to go once again.

4 thoughts on “Same old, some new, and a vacation on the horizon”