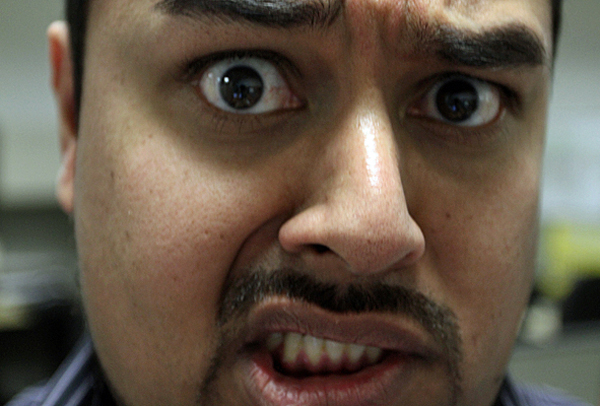 It was actually hard to write the headline to this post, and I really didn’t want to leave it up after I did. I can’t fathom having spent nearly $500 last month going to restaurants but obviously ’tis shamefully true. I’m just a working man, not rich by any means — I think we probably put a few of those meals on our credit card just so we could still go out with friends. In retrospect, that’s whack.

If I had kids, which I plan to one day, this wouldn’t fly, so it’s better to live and learn now then do and burn later.

The best thing about this blog is that it’s the best learning process I’ve had in my life. Fat Dude has taught me the value of accountability and responsibility, so instead of wallowing in my own guilt, I decided to write this post as a reminder to never spend this much money regularly eating out again.

I recently talked about getting back to basics and how I intended to use calorie counting as a tool to track my daily weight loss progress and eventually meet my goals. Well, it worked, and then it didn’t work.

Two weeks ago, calorie counting worked Monday-Thursday, and then on Friday, Saturday, Sunday and Monday (Labor Day) I chose to grab the majority of my meals out. I know weight swings from day to day, but it’s greatly altered by what one eats, as my scale proved to me: first Monday: 239.9 lbs.; first Thursday: 234.something lbs.; last Monday: 239.8 lbs.; last Tuesday: 236.1 lbs.

The ill-effects of eating at restaurants consistently, as I have since forever, finally smacked me in the face when I thought about the dent in my wallet and the expansion on my waistline simultaneously (something I’d never really done before). Portion sizes vary plate to plate, you never know how much oil or butter is in a dish, and, as a result, the calorie count suffers. Even when I try to stick to a calorie count at a restaurant, it’s almost impossible to have anything delicious for under 500 calories. Then I started thinking about how I’m a pretty good home cook  that can make great things for low calories and how lazy and less-delicious it is that I rely on outside food so much.

It isn’t just me though. The Google says the average American eats out 4-5 times per  week. I’d say, on my worst days, that should really be twice a day, counting lunch and dinner. It’s easy to see how I, and a lot of other people I talked to recently, are able to spend so much money going out each month.

I started trying to figure out how I spend the $475.19: Approximately $118 a week going out, lunches and dinners mostly. Nadia and I often go out because she comes home a few  hours  late than me and it’s often the easiest thing  to do if we’re low on supplies or just too tired by that point. We head out, but because we don’t eat fast food anymore, we end up seeking healthier fare at higher-priced restaurants, which, as I’ve seen now, just eats through my budget.

In keeping with the whole  learning from your mistakes thing I’ve been trying  to do here, I’ve decided that I’m just not going to do it anymore. It will be easier to count calories and I’ll have true control over everything I eat if I drastically decrease the number of times I eat out per month.

Originally I was going to give up going out entirely, but in half-week since between writing  and publishing this, I had to go out once when I was  sick (needed pho medicine) and once already after getting  home late on Monday night. On the other hand, I’ve also made great strides in declining friends lunch requests (not easy to do), pushing away nachos at the bar during Thursday football, and telling a visiting friend that we could hang out and eat together as long as I cooked the meal at home.

Full disclosure: We have a food truck event at work Friday, our last one of the year (for charity, lol), and I’m going to enjoy myself within reason.

I gave up on fast food and processed  food about this time last year. I can seriously count the number of times I’ve been to a drive-thru in the last year on one and a half-hands and I’m very proud of that. I’m not saying now that I’m giving up on going out, but I am until I can use  the privilege responsibly.

It’s a little scary because it means I have to be on top of my game 24/7 — shopping, prepping and cooking.

I’m not used to doing all that all the time, as you can tell by my great grand total. My weight — rather, my over-weight — isn’t just because of one factor, it’s due to many. I’m proud to acknowledge and stand  up to one of the great setbacks to a healthier me.