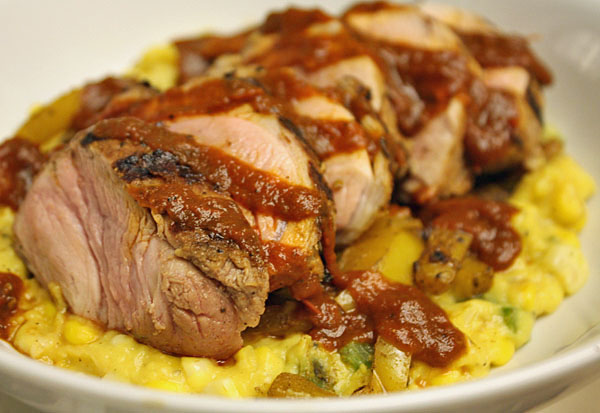 I was intimidated going into the kitchen for Week 25, Meal 1: Marinated pork loin over jalapeno corn pudding and sauteed peppers with smoky ancho sauce.

Because there were four components, I knew this meal would be a test of my organizational skills, focus, kitchen timing, cooking methods … well, you get the picture. This was a test, but one that I was ready to face head on.

The hard work and preparation paid off — this dish is killer. The juicy, spiced pork complements the sweet corn — the definite star of the show — and the smoky, peppery sauce drizzled on top ties together so many complementing flavors.

There are a lot of components in this recipe, so the way I cooked it for dinner was to remove the meat from the marinade and let it come to room temperature for about 45 minutes while I cooked. I started by toasting the pepper, then soaking it. Next, I did the corn pudding, then the smoky ancho sauce. I used the stopwatch feature on my cell phone to time the pork on the grill while I sauteed the peppers. I finished them while the meat rested then quickly reheated the pudding before plating. It was mayhem, but controlled mayhem, but I was able to overcome it through organization.

For simplicity’s sake, I’ve broken this down to each component. Hope it helps. 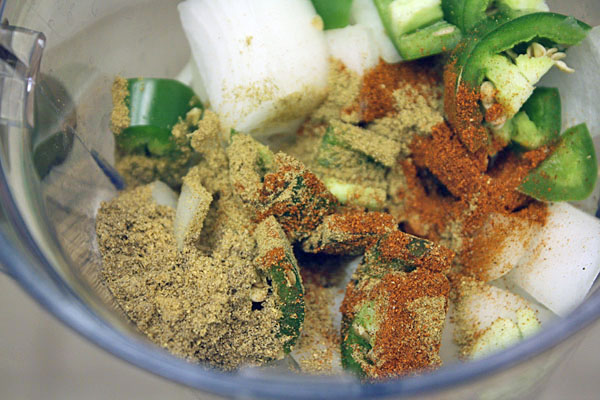 In a Magic Bullet or blender, mix 1/2 onion, 1 jalapeno and 1 t each of paprika, cumin and coriander with a little bit of water until well pureed. Marinate the pork loin for at least an hour, but preferably overnight. 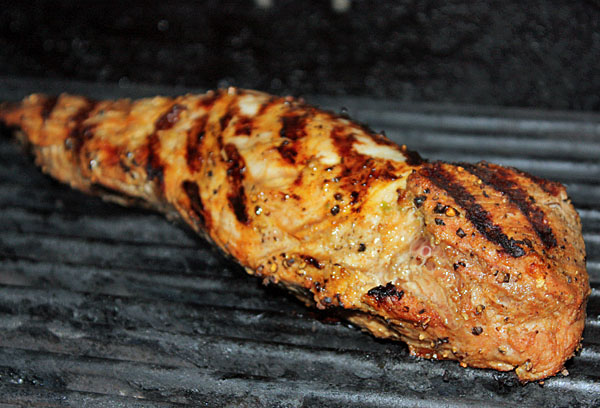 Preheat the grill to high. When ready, hit it with cooking spray (we’ll be saying that a lot today) and let  it  cook for 5 minutes on each side. I was going to turn mine halfway through cooking, but the marinade wasn’t releasing from the grill and I didn’t want to ruin the meat. (Grill tip,  while we’re on the subject: If the grill isn’t giving up the meat, it’s not ready to turn yet. And try if you can to only turn your meats once.)

Allow the pork to rest after cooking for 5-10 minutes. Do not slice until ready to plate to avoid drying out the meat. When you’re ready to slice, cut 6-7 oz. per person. You’ll see how to plate it at the end. 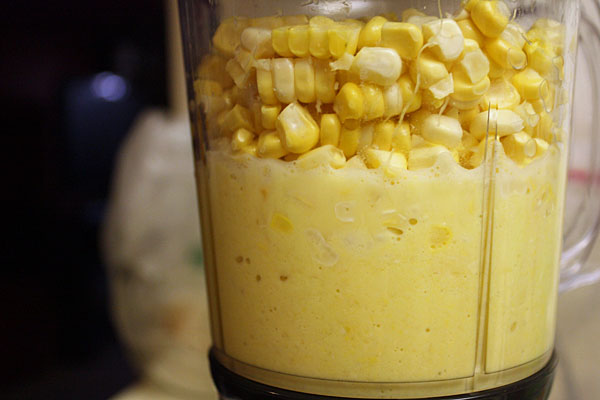 Next, the corn pudding:

In a juicer, juice the kernels from 3 ears of corn. If you don’t have a juicer then blend the corn with a little water and then strain out the solids. You should get about 1 cup of juice. Discard solids. 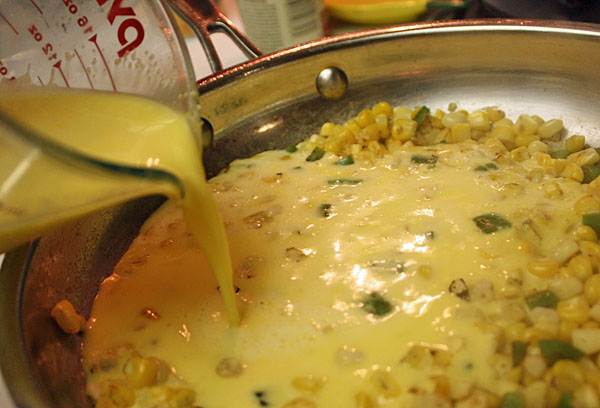 Heat a medium sauce pan over medium-high heat and hit with cooking spray. Add remaining corn, 1 jalapeno, and 1 clove of garlic. Saute for 1-2 minute until vegetables begin to soften. 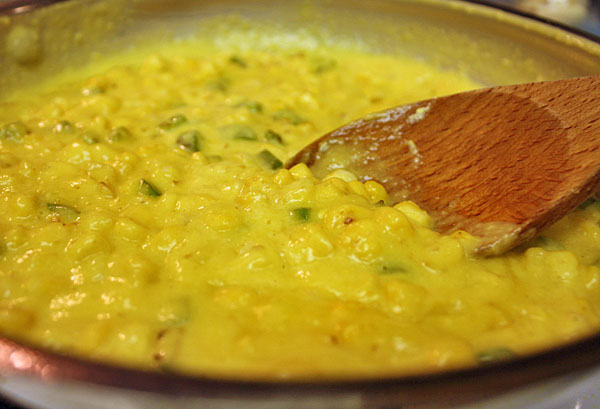 Lower the heat to medium and add the corn juice. Stir with a wooden spoon while it comes to a simmer. As the juice comes to a simmer the natural starch in the corn will begin to thicken the mixture. Simmer until the mixture resembles a thin pudding. (If it seems to thin you can thicken it with a mixture of 1 t of cornstarch and 1 t of water mixture.

Season with salt and pepper to taste and reserve for serving.

Next, the smoky ancho sauce: 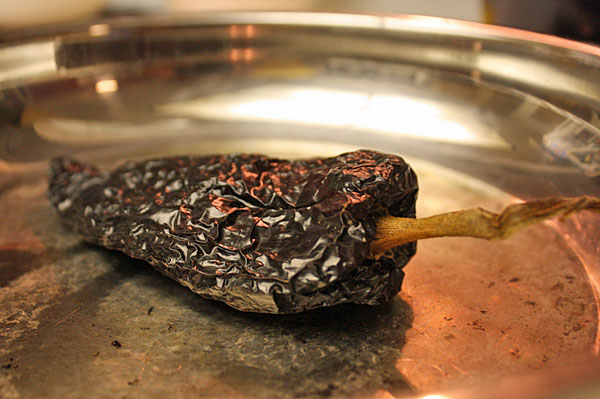 You should probably do this step before tackling the corn (but I put it down here for organizational purposes because  we’re juggling so many components at once. Besides, a smart cook reads the entire recipe first): Toast 1 dried ancho pepper in the oven or a small saute pan over medium heat. The pepper will get a little brown and puff up, but make sure not to burn it! When toasted, take out the seeds and stem and soak in hot water for 20-30 minutes. (Insert corn pudding preparation … ) When the pepper is soft, drop the rough chop on it. 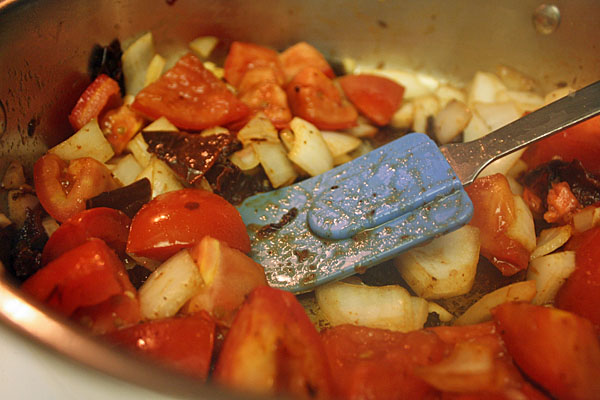 Heat a medium saute pan heat over high heat and hit it with cooking spray. Add ancho chile, 3 roma tomatoes, 1/2 onion and 1 clove of garlic. Saute for 4-5 minutes until all the vegetables soften and the tomatoes are falling apart. Lower the heat to medium and simmer until 75 percent of the liquid from the tomatoes is gone. 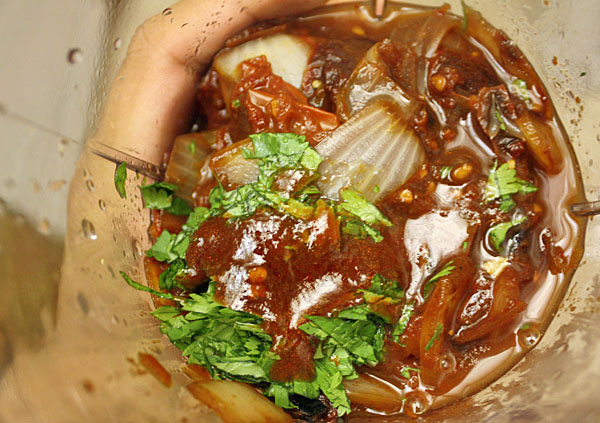 In a Magic Bullet or blender, blend the tomato mixture with the juice of 1 lime, 1 T of cilantro and 1 t of adobo sauce. Mix until smooth and season with salt and pepper. 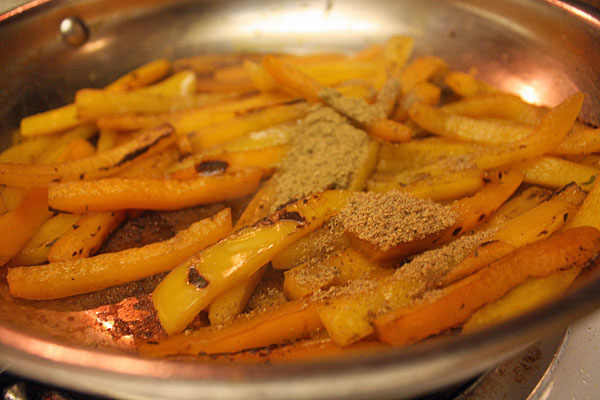 Heat a medium or large saute pan over high heat and hit with cooking spray. Add 2 bell peppers and saute for 4-5 minutes until the peppers begin to soften. Add 1/2 t of cumin and 1/2 t of coriander. A little water might help to soften the peppers as well. Once soft, season with salt and pepper.

I chose one  yellow and one orange pepper, but in retrospect  I wish I would have had  one red bell pepper  just  for a little color. Keep that in mind when you’re shopping. 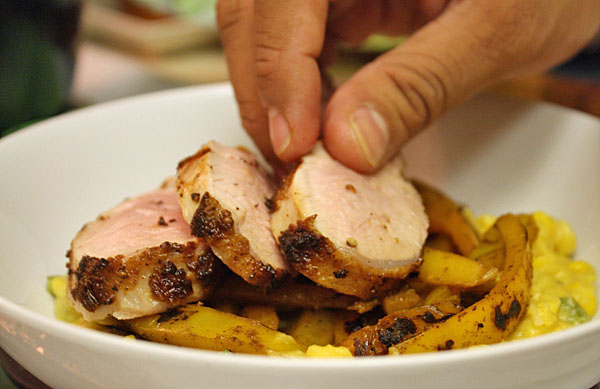 To plate: Split the corn pudding between two plates or shallow bowls. Top the pudding with half of the peppers, followed by 6-7 oz. of the grilled pork. Finish by drizzling the sauce on top of the meat and around the plate or bowl.

What  I’m left remembering most about this dish was the complexity of flavors and how the flavors — sweet, spicy, smoky — came in phases with each bite. The star however is the pudding. It’s fresh, simple and, even without cream, a hearty, satisfying side dish that I’ll be putting into regular rotation at my house.

A parting thought: Buy some extra chicken breasts at the store and marinate them in the smoky ancho sauce when you’re done using it for this dish!