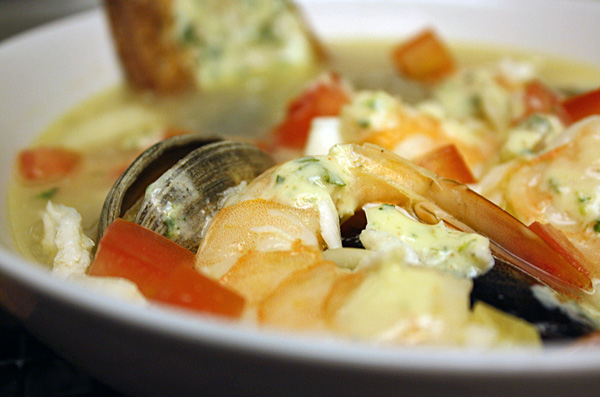 Of the three meals on the menu for Week 20, I was most excited for Week 20, Meal 1: Bouillbaisse with crouton and garlicky yogurt rouille.

There’s something about making French food that makes me feel more distinguished as a home cook. Maybe because for many chefs, French cuisine is the starter to learning classic techniques and the fundamental lesson that simple really is better.

That we’ve never much cooked with seafood on the blog (save  for fish and shrimp) or made much broth (except that awesome oxtail broth for the pho), this meal provided a new challenge that I knew would have a big  payoff at the end.

(Note: You should be able to buy one large baguette and use it for all three days of recipes. If you choose to double the po’ boy recipe, you’ll need two baguettes. The “rouille” from this recipe is also used for Week 20, Meal 2: Blackened shrimp po’boys.)

Soup
1 T olive oil
1 leek, white and light green only, cleaned and chopped
1 small yellow onion, roughly chopped
1 clove garlic, smashed
1 bulb fennel, medium dice
4 roma tomatoes, 2 roughly chopped, 2 seeded and diced
1 large pinch saffron
1 large sprig basil
1 whole fish (branzino or snapper are most common. Chef  Brian prefers branzino. Get it filleted and skinned so you don’t have to bother, but keep the bones for the broth. You should have 8-12 oz. of cleaned fish filet, which you will cut into 1 oz. pieces)
12 shrimp, with shells, size 26-30 or similar (Save the shells for the broth)
1/2 cup white wine
6 cups water
8 mussels, debearded
12 manila clams
salt and pepper, to taste

Crouton
4 pieces baguette, sliced on a severe bias (You want a 1/4-inch thick slice that is about 5-6 inches long)
olive oil
salt and pepper, to taste 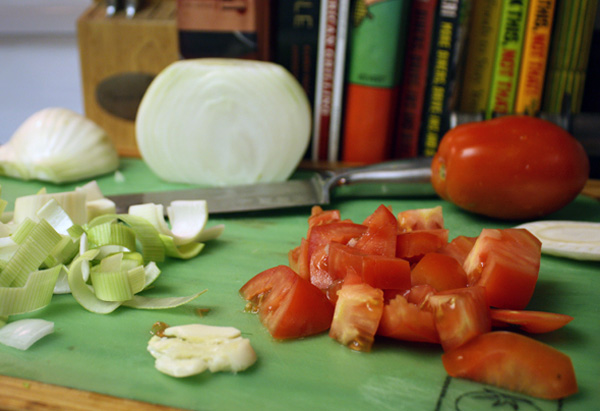 Reserve the diced tomatoes in the fridge. 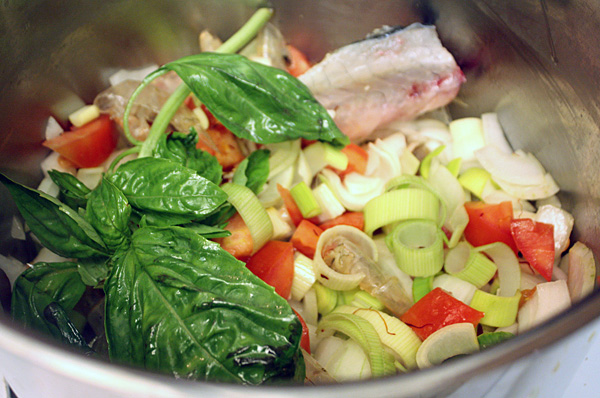 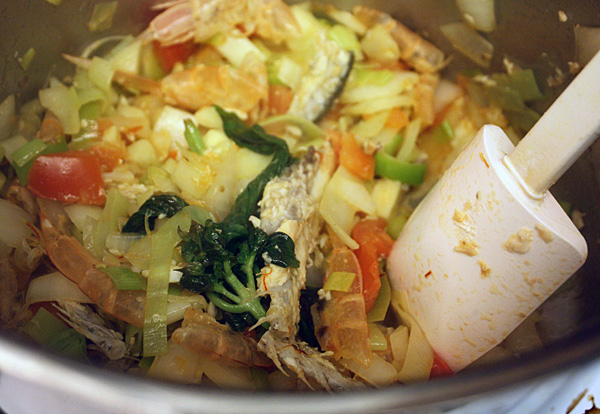 Cook, stirring occasionally, for 5-7 minutes  until the veggies soften and the mixture yields and intoxicating aroma that they should bottle and make air fresheners out of.

Once the mixture starts sticking to the bottom of the pot a bit, deglaze the pot with 1/2 cup of white wine. 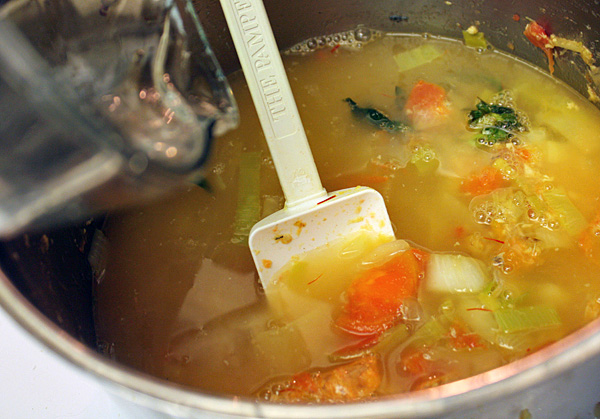 Add 6 cups of water and bring to a boil. Reduce  to low and let simmer for 45 minutes.

While the broth is cooking, you can knock out the rest of the recipe. 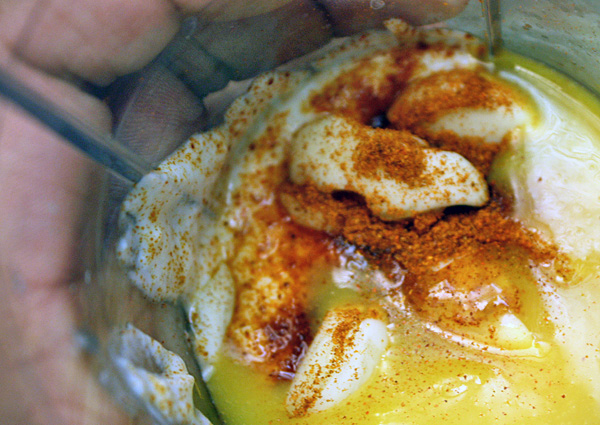 In a blender or Magic Bullet, add 5 oz. of Greek yogurt, 4 cloves of garlic (roughly chopped), 2 T of orange juice concentrate and 1/4 t of cayenne pepper. 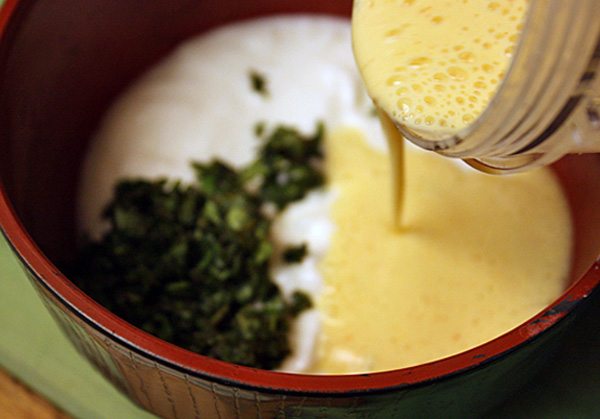 In a bowl, combine the other 5 oz. of Greek yogurt with 2 T of chopped basil. Lightly whisk the blended yogurt with the yogurt and basil, and season with salt and pepper. Reserve in the fridge. 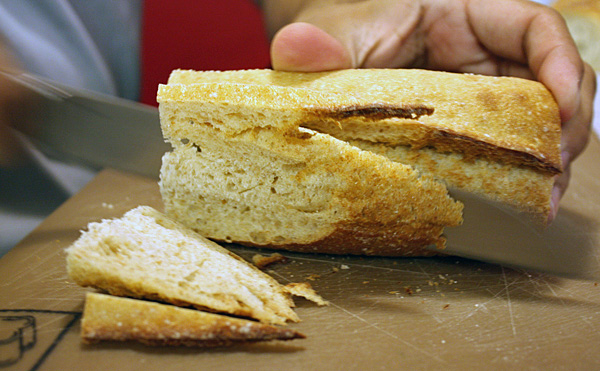 Slice a 5-to-6-inch piece from the baguette and cut four slices from it, about 1/4-inch thick, on a severe bias.

Plan according to time, but you want to preheat the oven to 375 so you can cook your croutons about 5 minutes before you finish the soup. 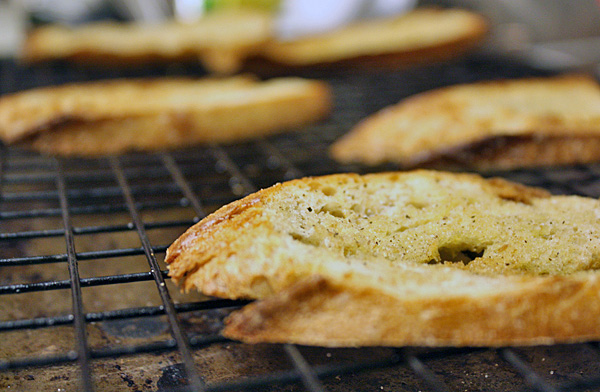 When you are ready to make the croutons, brush them lightly with olive oil and season with salt and pepper. Bake croutons until lightly golden brown. 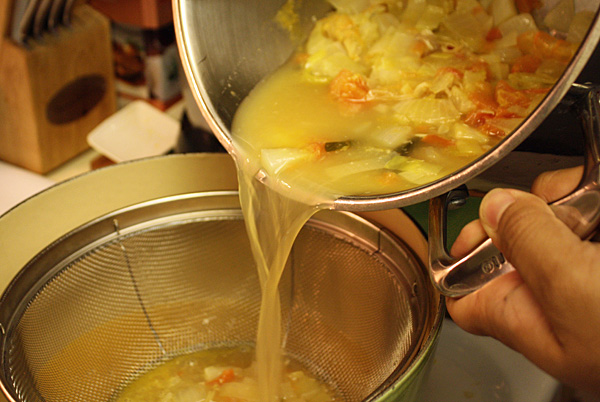 Once the broth is done simmering, strain into another pot. Season with salt and pepper to taste.

Bring to a boil, and then reduce  to a simmer. 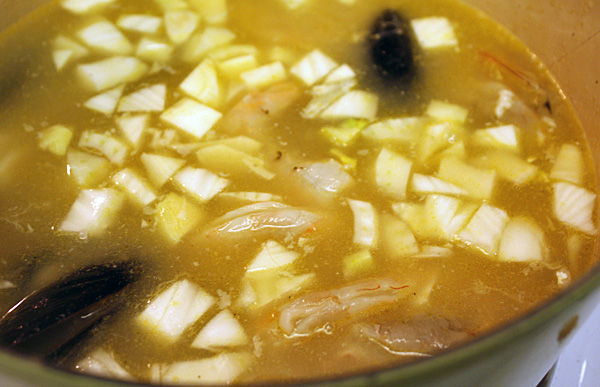 Add remaining fennel, clams, mussels, shrimp and fish filet pieces. Cover the  pot and cook for 3-5 minutes, untilfish and shrimp are cooked through and the mussels and clams are opened.

Discard any shellfish that didn’t open on its own. 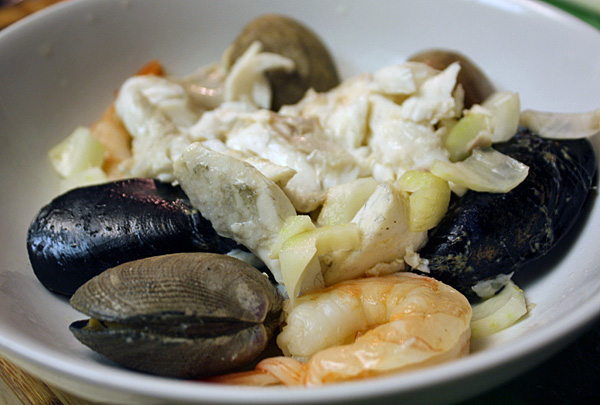 To plate: In each bowl put 3 shrimp, 3 clams, 2 mussels, and 2-3 pieces of fish. Ladle in broth. Garnish with chopped tomato and a drizzle of rouille. 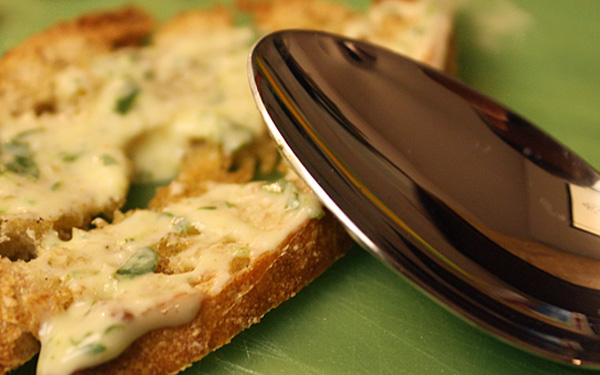 Spread a thin layer of rouille on the crouton as well, drop it  in the soup and dig in!

Chef Brian said I’d get that restaurant feeling from this one and he was right. Though my seafood was a bit rubbery because  I overcooked it (be careful on that). The crunch from the fennel contrasted nicely with the plump shrimp and tender fish, so the soup wasn’t just pretty, it had texture too.

Best part was  the crouton. The bread sucked up the broth so each bite had a concentrated burst of salty, briny ocean followed by bright, citrus-spice punch.

I can’t believe this was dinner. At home.