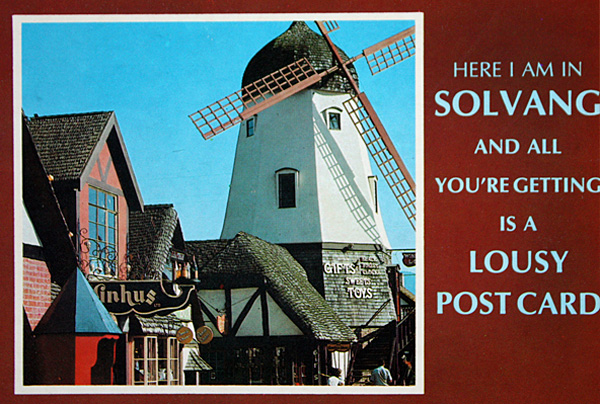 Back when I was writing for Food Frenzy, my co-blogger/homeboy Jeff traveled to exotic locales including Europe and … er, St. Louis while I sat at home and lived vicariously. I gave up travel each year, mostly for the time and expense  required to go to the Coachella Music and Arts Festival, but that doesn’t really count — it’s more of an endurance test than an oasis of relaxation.

This year, the festival sold out in a record six days, and I was left with a week’s worth of free time to fill. I wound up in a tiny town 30 miles north of Santa  Barbara called Solvang — essentially “Little Denmark” — with Wifey Nadia and friends Matt, Neil and Gina.

Follow the jump to feast your eyes on my travels through a true California gem.

Ah, Solvang. Come for the food … 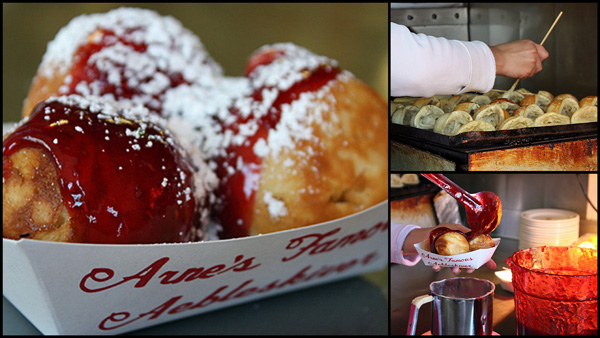 Aebleskivers: Solvang’s claim to fame is a Danish pancake ball called an  aebleskiver. It’s sometimes covered with apple (hence the name), but in S-town the standard serving comes with a slathering of raspberry jam and a dusting of powdered sugar.

They were best at Solvang Restaurant, home to Arne’s Famous Aebleskiver. You know a place is great when there’s a line out of the restaurant, and one at the walk-up window too. 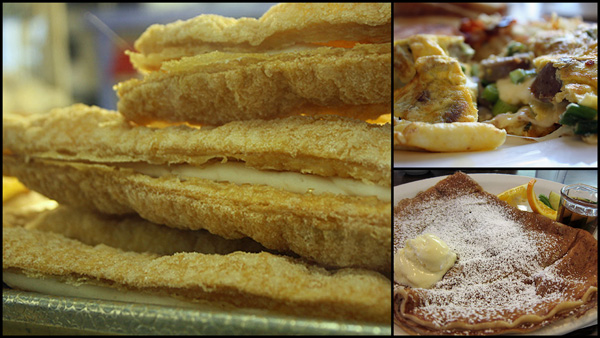 Danish breakfast, assorted: The scene in Solvang dies around 8 p.m., so really, it’s all about breakfast. Best were Danish waffles at Olsen’s Danish Village Bakery. The eclair-shaped pastries, crispy and sprinkled with granulated sugar, are filled with a thin layer of cream cheese and a smear of sweet-tart raspberry jam. It’s flaky, it’s sticky — it’s perfect.

Danish sausages (medisterpolse), made of pork and heavily spiced with clove and allspice, showed up on menu’s all over town. I had it for breakfast at The Little Mermaid, where it was stuffed in an omelet  with creamy havarti cheese, loads of scallion and mushroom.

I also stole a couple of bites from Matty’s Danish pancakes at Paula’s Pancake House. I thought they tasted like regular pancakes, except much bigger and thinner. They’re perfect with a side of cinnamon apples, for realz. 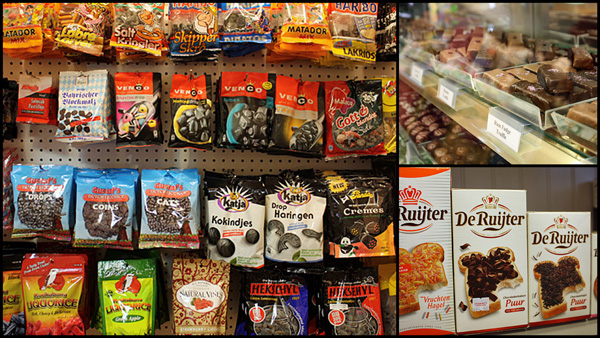 Candy like crazy: Ingebord’s Homemade Chocolates had all types of milk and dark chocolates, plus more variates of Haribo gummies than I’ve ever seen in my entire life. They also had a bunch of other brands of hard licorice and hard salted licorice. I tasted a piece, didn’t like it much, but to each his own.

There were also boxes of De Ruijter, which are sprinkles and chocolate shavings. The boxes depict them on toast, reminding me of the hundreds and thousands sandwich. 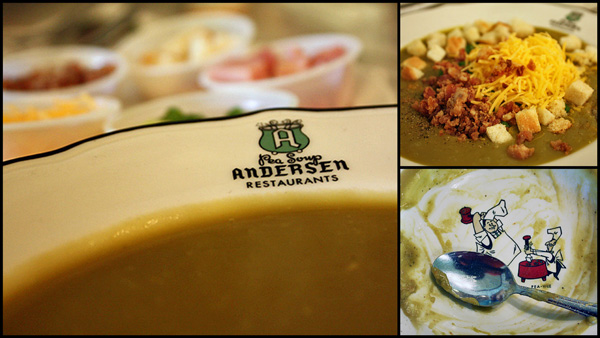 The O.G. pea: We took a trip down the road to Buellton, home of the original Pea Soup Andersen. For about $10, you can order the Traveler’s Special of all-you-can-eat pea soup, plus a limited amount of toppings including ham, bacon bits, shredded cheddar, scallion and croutons.

The velvety soup is delicious on it’s own, especially for being vegetarian, but a sprinkle of bacon and a dash of cheddar makes it better. 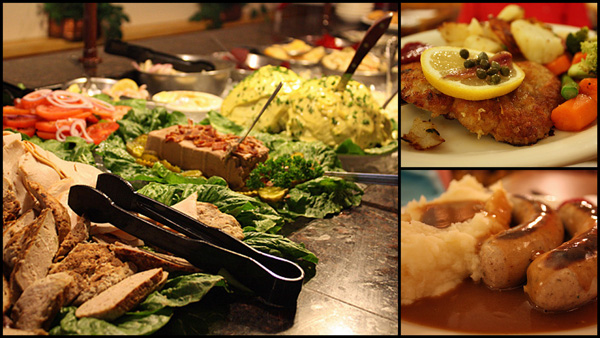 Pillage and plunder: We had our share of Danish breakfast, but wanted to sample the dinner fare. We tried the Red Viking, where you can dig into the smorgasbord (buffet review) for $17 per person. The  buffet was about to close, so we stuck to the dinner menu.

Most of the menu was meat and potatoes. Danish sausages came in a pool of savory gravy with a mountain of mashed potatoes. The schnitzel — pounded-out veal topped with lemon, caper and anchovy — was softer than I wanted the cutlet to be, but that’s just a small knock. This was a great introduction to a foreign cuisine.

… Stay, because you’ve got a buzz from all the wine … 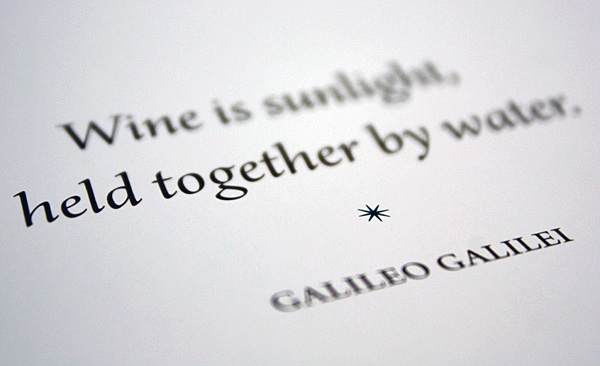 Veni, vidi, vino: Going in, I knew about all of the Danish stuff. I didn’t know that only a few miles away, in another small town, this one called Los Olivos, is a wine-taster’s paradise.

The wines are local, and their outposts — located within walking distance of each other — have their own qualities and characteristics. These were some of our favorites. 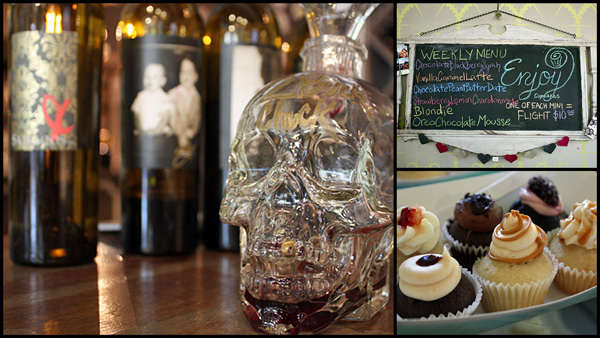 Family ties: Sarloos & Sons is without-a-doubt the coolest kid on the block. The excellent wines are family inspired (names on recent bottles include Mother, Father and Extended Family) and THEY PAIR THEM WITH CUPCAKES!

Seriously, the quickest way to my heart is through my stomach with a cupcake, and Sarloos’ food and wine hit all of the right notes. Worth it’s own trip. 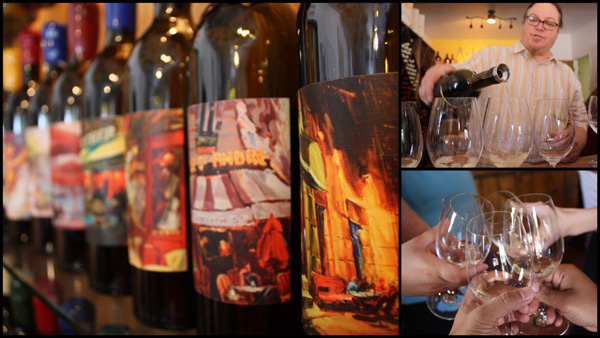 Art school: Artiste paired wine with art in a way I’ve never seen before. Bottles feature paintings, and the space itself doubles as a wine-tasting room and gallery. They even have sketch pads and an easel so visitors can create their own works to leave behind. 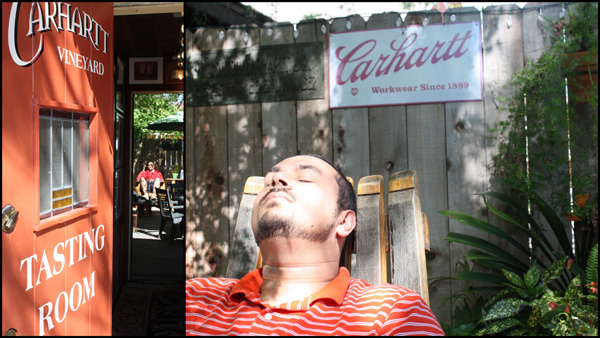 Time out: Carhartt Vineyard, across from Sarloos, poured smooth wines (the best was “Fourplay”) in the most zen-like atmosphere we found in Los Olivos. A water feature in the back is home to a handful of koi fish, and it’s easy to lose yourself in a glass of wine, the sound of trickling water and the springtime sun. 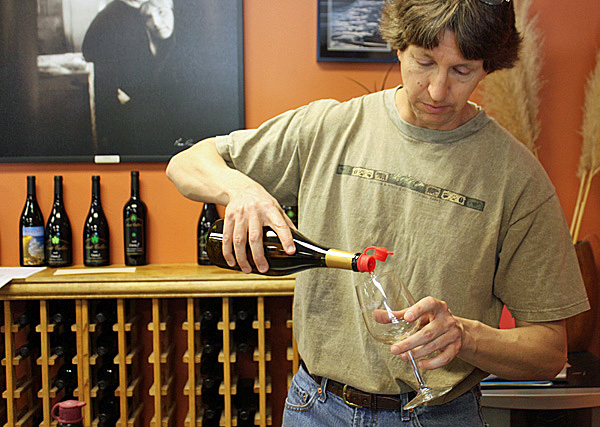 An education: Peter Scott Fraser of Scott Cellars gave us a lesson in grapes, the aging process and how terroir affects wine-making and the final product.

Scott is all about big, bold reds, and these glasses packed some wallop. 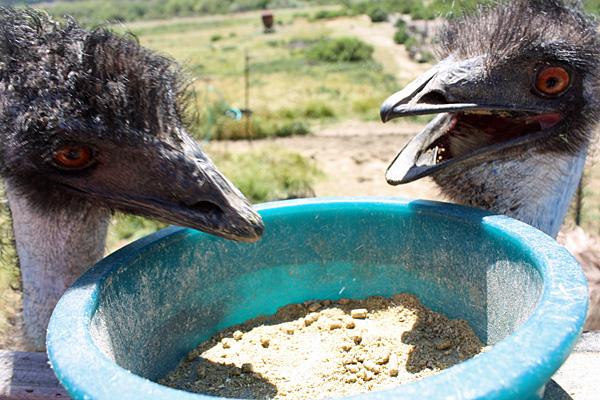 Welcome to Jurassic Park: It’s not all about eating and drinking. One of the stranger things I’ve done came at Ostrich Land, an ostrich farm that resembles Jurassic Park between Solvang and Buellton.

These were a couple of  the emus that came up to us for a feast. You hold out a dustpan attached to a bowl with food and they go to town on it. Quite a strange experience, but I’m glad we did it. It turned out to be one of the coolest/weirdest experiences of my life. Fun times. Huzzah!

For a week I indulged, but  I arrive back home feeling more rested than I have in a while. I’ve been out exercising each day since I returned, and I’m focused on eating the right portions of healthy foods. My diet mojo has been waning in recent weeks, but I’m back on it.

We’ll be back on Monday with a weigh-in (I haven’t checked how much I gained on vacation yet, but I’m hoping to work some of it off by then).

See you next week for another week of healthy cooking. It’s time for Meatball Mania!

6 thoughts on “Fat Dude does Solvang: A food and wine extravaganza”