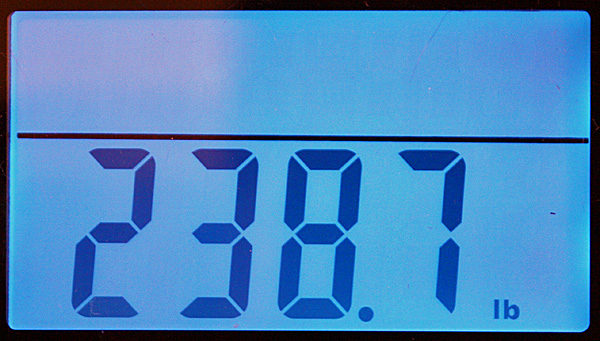 I chose the same week as Charlie Sheen to fly off the (diet) deep end just so nobody would notice.

But truthfully, what happened last week was the culmination of weeks of life, laziness and exhaustion simply getting the best of me.

It was gradual, taking several weeks, but I was slipping when I wasn’t as strict about drinking water. Then eating my snacks on time. Then portion sizes. Then going out. Gradually, but in such a little amount of time, I was able to sabotage the spirit I’ve worked so hard to cultivate these last few months.

While I wasn’t as strict on myself in the weeks leading up to last week when I flat-out gave up, I still felt like I was putting in a good-faith effort but the scale just wasn’t reflecting it.

Chef Brian dropped the dreaded P-Word, “plateau,” but I didn’t want to listen. He suggested interval running (where you walk some and you run some) but I thought it would interfere with my plan to literally walk my ass off, as promised. If I feel like walking is limiting me after six to nine months, I’ll start down that path.

But, instead of researching how to overcome a plateau, I simply succumbed to it. In the process I burned nearly two weeks of could-have-been-healthy eating. Writing it now, I feel stupid for doing this to myself. I know I won’t always be a saint when it comes to healthy living, but I should never have just given up.

I’d like to provide excuses, but I will truthfully say I wasn’t being healthy because I didn’t want to be healthy. I wasn’t going to let the plateau win, I would simply beat it at its own game.

The only problem is, I know now how good it feels to feel good. I also know what it feels like to be lugging around 258 lbs., so why would I want to go back?

Well, I don’t. But reality is setting in, and I can already say the success I experienced in the first three months won’t be as dramatic in the next three. I’m in it for the long haul (I promised myself I would cook three new meals a week for 52 weeks), but I have to remember also that I should be in this for the really-long haul, as in, the rest of my life.

I’m working on regaining that focus. I will defeat my own boundaries, and eventually this plateau.

I’ll let you know next week how it’s all going.

One thought on “I’m with stupid”