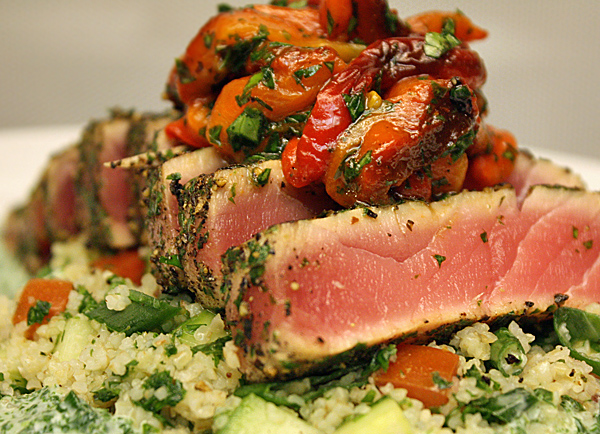 I tried to make this meal look as beautiful as I could to show my appreciation for my wife’s family, which hails from Jordan.

I often joke that the best part of marrying her was the food. Before, I only had an appreciation for the flavors, but now I have respect for anyone who has ever made tabbouleh, because in all honesty, the wheat-based staple is a pain in the ass to prepare.

No matter though. The effort was worth the final product. Here’s Week 13, Meal 1: Parsley and black pepper-crusted ahi over tabbouleh with mint yogurt and roasted bell pepper.

This recipe starts with three processes that take some time. First, preheat your grill to high. 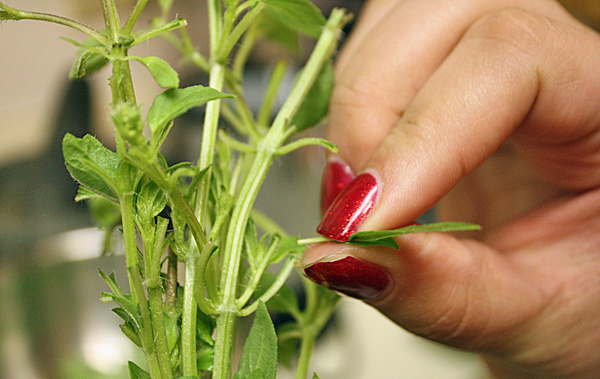 While it’s heating up, pull the leaves from 1 bunch of basil and 1 bunch of mint. 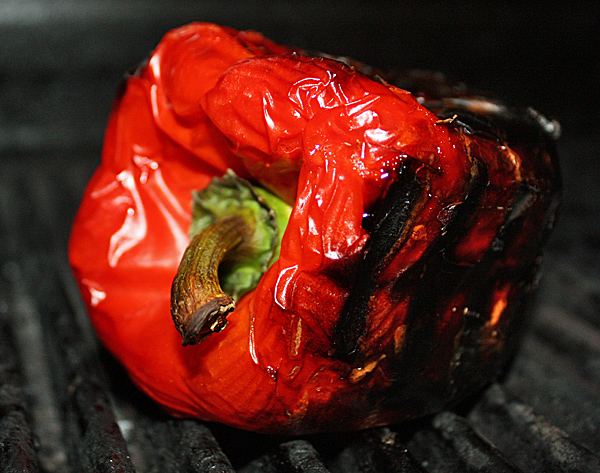 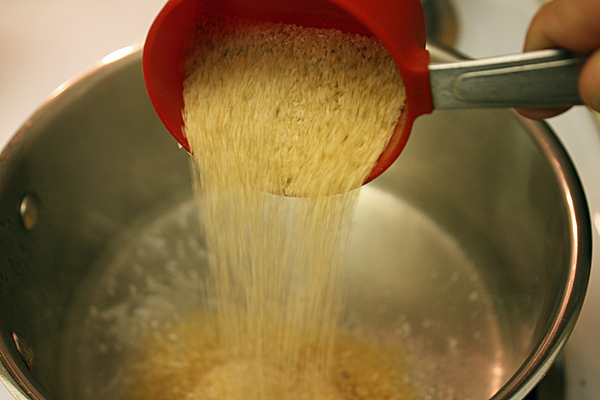 While the pepper is roasting, cook 1/2 cup of bulger wheat according to the directions on the box. The brand I bought had me boil 1 cup of water, toss in the wheat and stir for about 2 minutes. The wheat started to stick together toward the end. When the time was up, I covered the pot for 4 minutes. Check on the pepper during that time.

When the time is up again, transfer the wheat into a bowl and let it cool down.

Rinse the pot you just cooked the wheat in and bring some water back to a boil. Salt the water again and shock the bunch of mint leaves. Pat dry and reserve. This will later go in to the mint yogurt.

Now for the veggies. 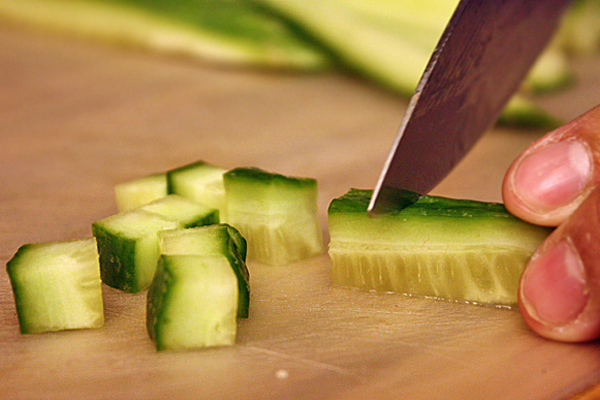 Dice 1/2 of an English cucumber into small pieces. Know that tabbouleh is about great knife skills, so cut as uniformly as possible. Don’t forget to check on the pepper during this time too. I know it’s a pain, but you should almost be done by this point.

When the pepper is done, toss it in a plastic container or plastic bag for about 20 minutes, so the skin will easily separate from the flesh.

You should also seed and dice 2 roma tomatoes into small pieces. (How-to). 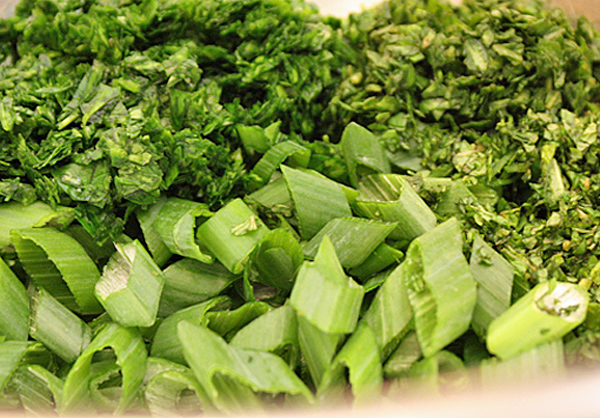 Finally, the really tedious part. Chop 1 T of mint, 4 T, plus 1 t of parsley, and 1 T of basil. Also, thinly slice the dark green portion of 1 bunch of scallions. 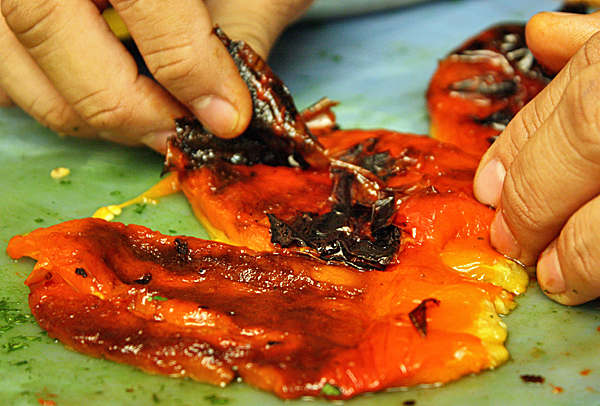 Remove the skin from the red pepper and slice into thin strips. Combine the strips with the 1 t of chopped parsley, 1 t olive oil, 1 t white wine vinegar and salt and pepper, to taste. 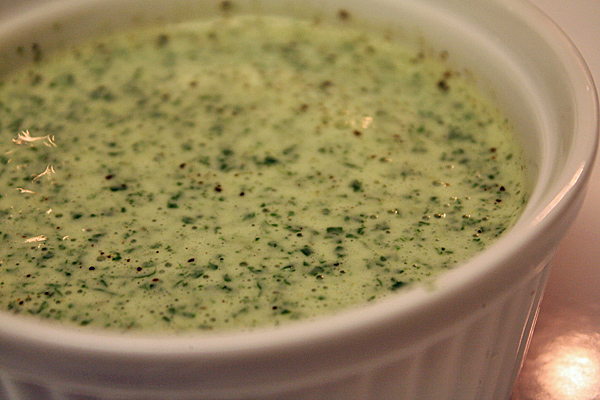 In a blender combine the mint leaves you boiled earlier with 5 oz. of Greek yogurt. Whip it good and keep in the fridge. 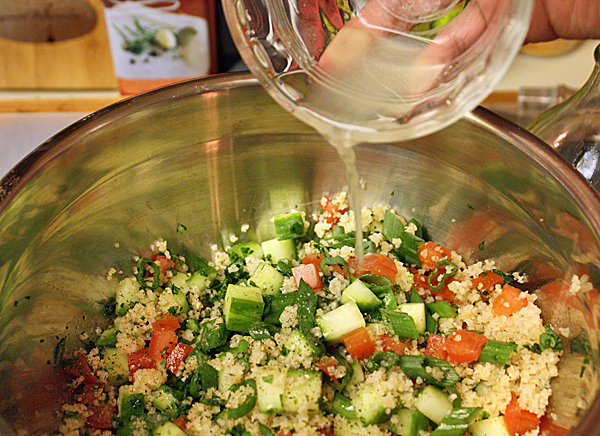 We’re in the home stretch. Next, combine the wheat, cucumber, tomatoes and herbs with the juice of 1 lemon and 1 T olive oil. Toss well and stick in the fridge, too. 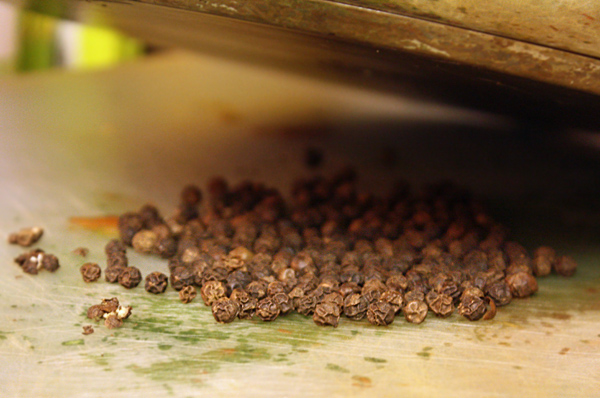 Lay 1 T of peppercorns out in a single layer on the cutting board. Using the bottom of a saute pan or the flat side of the knife, crush the peppercorns so you still have fairly large pieces but no whole peppercorns. Mix with the 2 T of parsley.

I’m not gonna front. I tried to do this and shot peppercorns everywhere. So I threw them in my Magic Bullet and cut ’em down in there. Salt two 6 oz. pieces of ahi tuna and coat each with the herb/pepper mixture. Heat 1 t of olive oil in a large saute pan and sear the fish for 30 seconds on both sides.

When it’s done, allow to rest briefly and then slice into pieces. 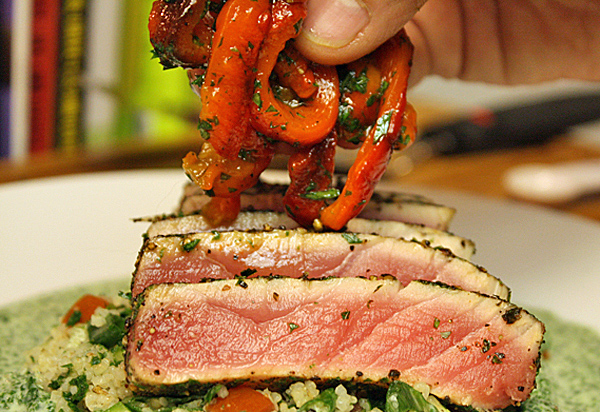 To plate: Place 3/4 cup of tabbouleh on a plate. Surround tabbouleh with a few tablespoons of yogurt. Place sliced tuna on top and then finish with a nice mound of roasted peppers.

The sour, bold yogurt cools down the peppercorns and the sweet roasted red peppers round off the tang and bite of the yogurt. The tabbouleh adds layers of freshness and a nice filler in comparison to the light tuna.

Quite a meal to make and to eat, but like I said in the beginning, totally worth it in every aspect.