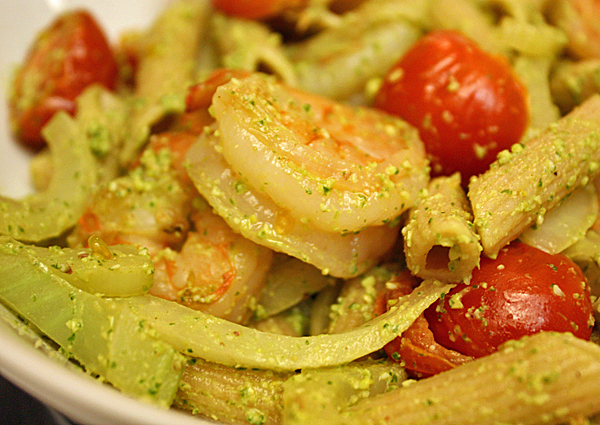 I never choose pasta when I’m out. Restaurants charge a ton of money for something that costs so little and the sauces are usually weighed down with oil or butter.

And as for those sauces, they’re the same everywhere, just variations on the usual suspects — marinara, Alfredo, pesto, etc.

For pasta week, Chef Brian pulled the proverbial rabbit out of his hat with sauces I would never have thought of, let alone thought I’d cook at home. 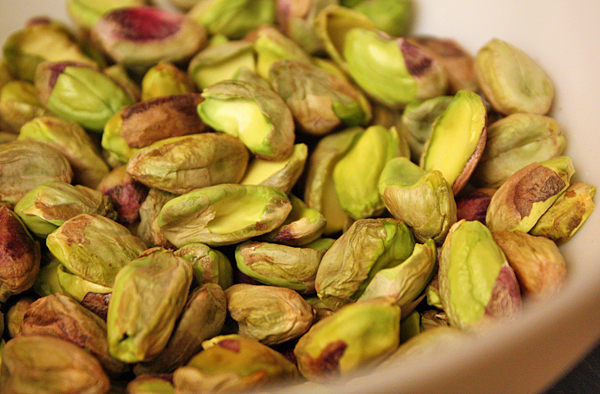 Start with the prep. First, remove the shells from enough pistachios to yield 1/4 cup. 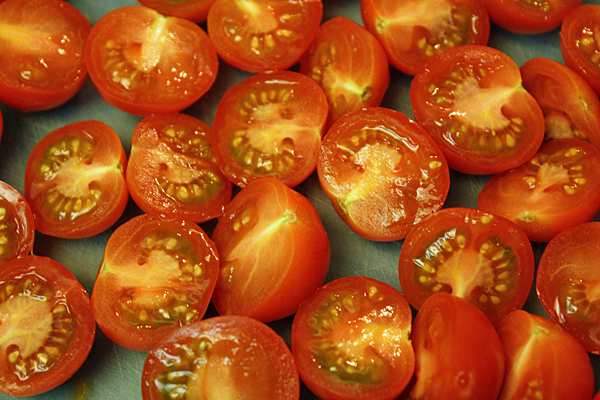 Cut in half 1/2 pint of cherry tomatoes. 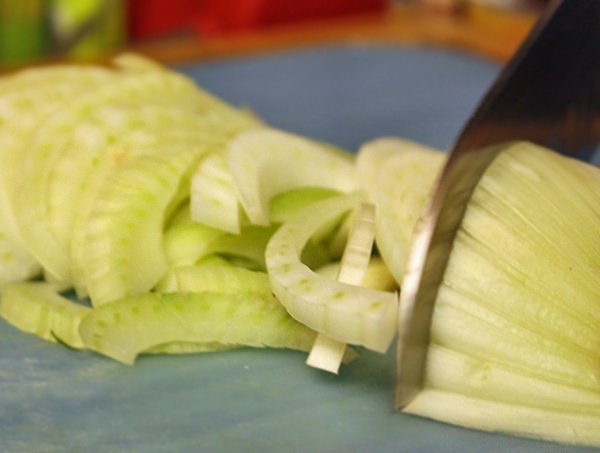 Chop the top off 1 bulb of fennel and slice it up. 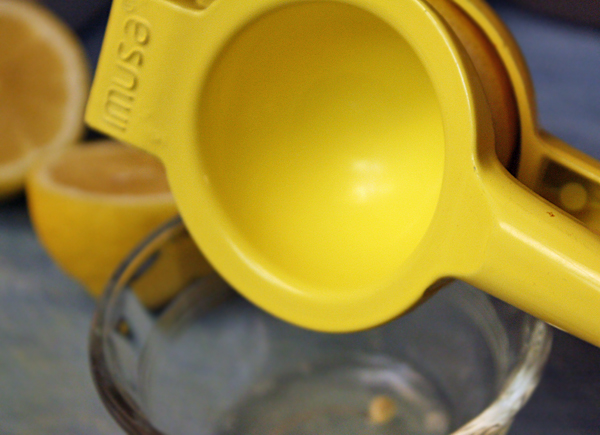 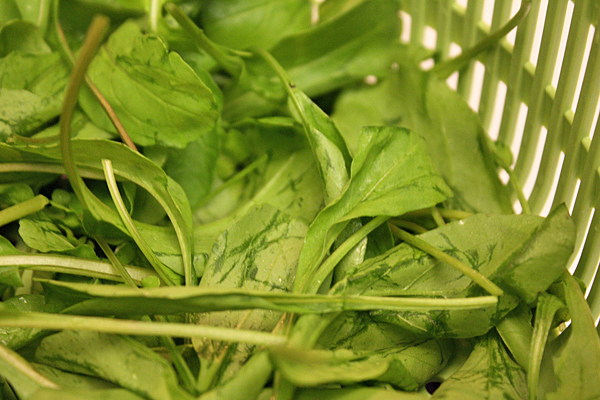 Rinse and dry 3 oz. of arugula. 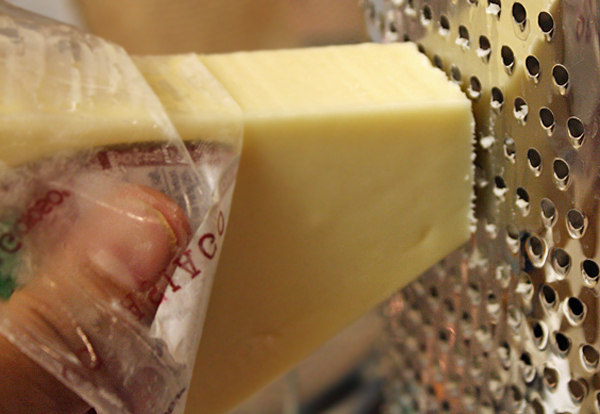 Shred 1/3 cup of asiago cheese. Beware, however. This is some stank cheese.
If you’re following the prep steps in order, you should also bring to a boil enough water to make your pasta in. Make sure to season the water with 1 T of salt. This is the only chance you’ll have to add flavor to the pasta. 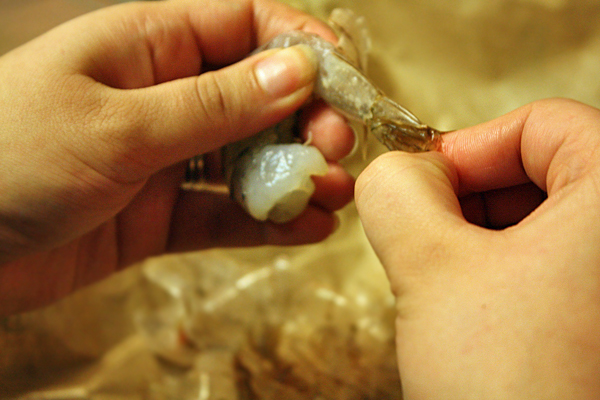 Finally, peel 6 oz. of shrimp if you didn’t already buy them peeled.

When the water comes to a rolling boil, add in 2 serving sizes of pasta. Boil according to the box’s directions — I cooked mine about 10 minutes. 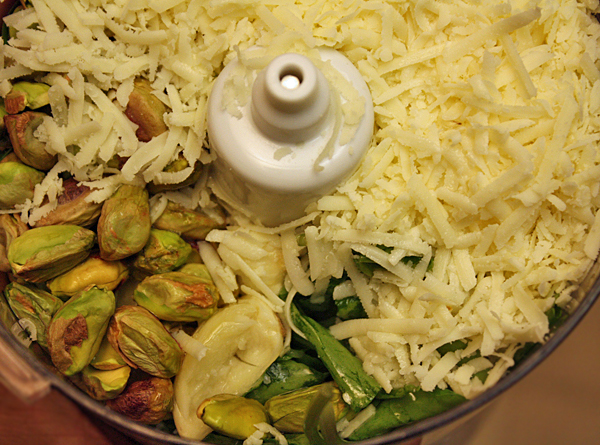 While the pasta is cooking, combine arugula, pistachios, asiago cheese, lemon juice, 1 clove of garlic and 1 1/2 T of olive oil in a food processor. Puree until it becomes a thick, green paste. 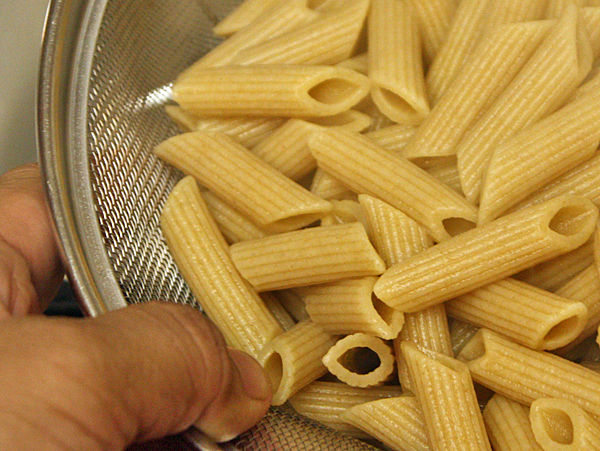 When the pasta is done, drain it into a strainer, give it a slight drizzle with olive oil and shake it up so the pieces don’t stick together while you’re cooking the fennel and shrimp. 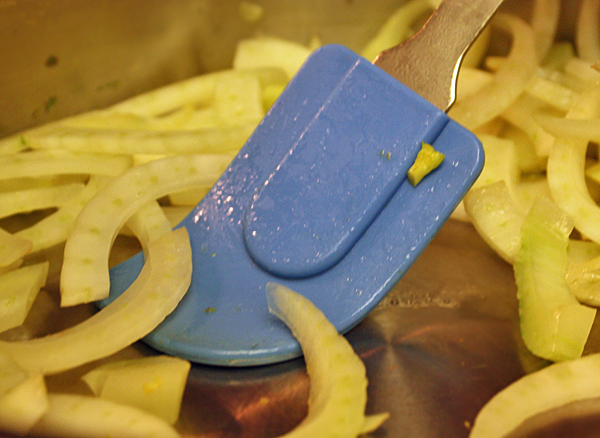 In a large saute pan, heat 1/2 T of olive oil over medium-high heat. Add fennel and saute for 1 minute. 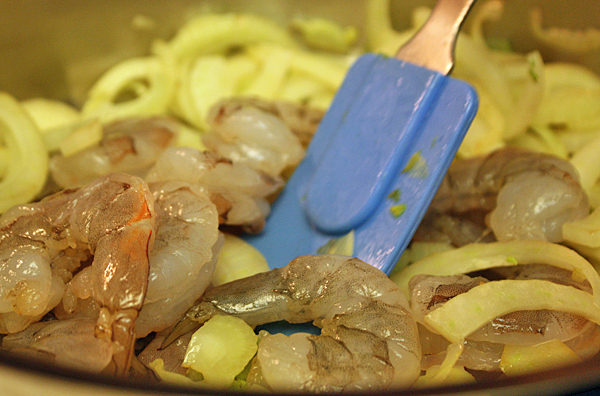 Add shrimp and cook until they’re about 90 percent done. They’ll go from grey to pink, but before they turn completely pink … 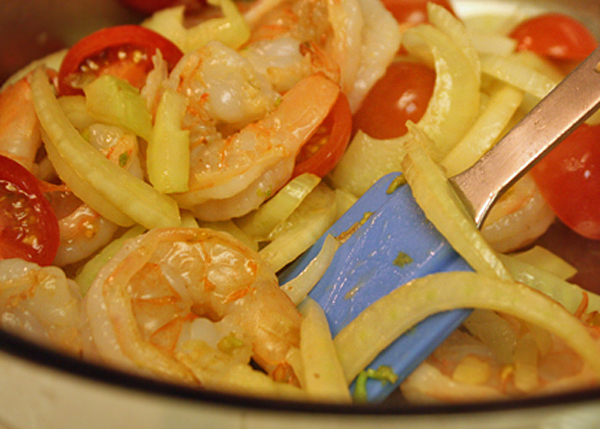 Add the cherry tomatoes and cook until heated through. Your tomatoes and shrimp should come to temperature around the same time. 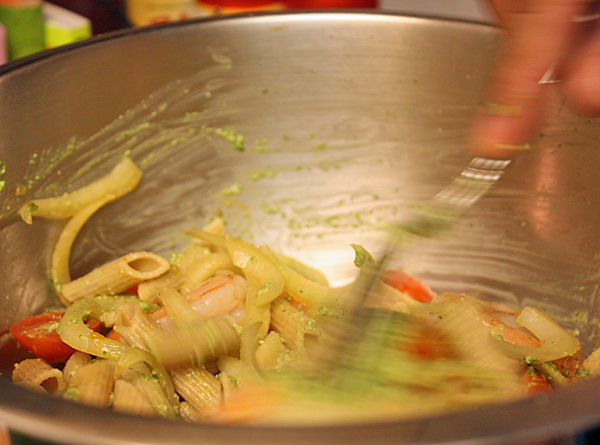 Toss the pasta in a bowl with the shrimp, fennel and tomatoes. Using a tablespoon of sauce at a time, incorporate until the cheese in the pesto starts to melt and the pesto coats everything lightly, but evenly. Divide the portion and dig in!
Having never cooked with fennel, I was worried the licorice flavor of the vegetable would overpower, but the cooking processed mellowed out the fennel and the sweetness of the shrimp and tomatoes, paired with the citrus-y, nutty pesto rounded out the meal in a very satisfying, unexpected way.
A pretty dish to impress your friends with, that’s for sure.